An unnamed correspondent from Harts in Lincoln County, West Virginia, offered the following news, which the Logan Banner printed on April 3, 1925:

Charles Brumfield of Harts has been transacting business in Ironton, Ohio, the past week.

Herbert Adkins of Harts is prospecting business in Huntington.

Miss Jessie Brumfield is teaching a successful school at Rector. She spent the week end with homefolks at Harts and was accompanied by Miss Cora Adkins and Mrs. Herbert Adkins and Mrs. Robert Brumfield of Harts.

Mrs. Robert Brumfield of Harts was shopping in Logan Saturday.

Edward Brumfield of this place is preparing to attend school at Hamlin.

Mrs. Robert Dingess of Queen’s Ridge returned to her home after a short visit with her mother, Mrs. Charles Brumfield, of Harts.

An unknown correspondent from Harts Creek in Lincoln County, West Virginia, offered the following items, which the Logan Banner printed on December 12, 1924:

Mrs. Hollena Ferguson has sold her sheep and is going to buy her a fine Buick car and she has employed Mr. Wesley Ferguson for her chauffeur.

Herbert Adkins has purchased his bride a fine car and bought her a fine automobile coat to go riding in.

Mrs. Nerve Brumfield was over at Harts shopping last week.

Herbert Adkins has hired Robert Robinson to do his janitor service.

Misses Sallie and Dixie Adkins are the champion spellers of Harts Creek.

Mrs. Lizzie Tomblin has sold her geese to Benjamin Adkins and is going into the poultry business.

Enoch Adkins was seen in Harts Monday with his mule team.

Mrs. Belle Adkins has got in a fine lot of Christmas toys.

George McComas has employed Hendrix Brumfield to run his school.

During the feud, this site hosted Bill Fowler’s store and saloon, as well as the Hart Post Office. During the 1890s, Al Brumfield’s saloon and store was situated here. 24 May 2018. 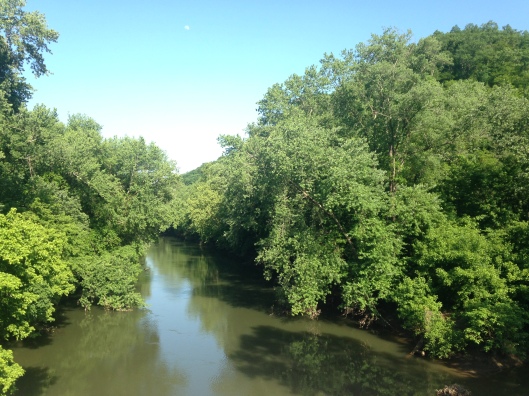 Looking up the Guyandotte River from Harts, WV. The mouth of Big Harts Creek is just to the right. 24 May 2018. 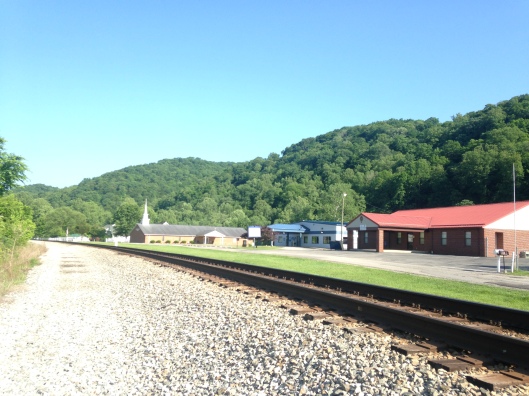 Looking up the CSX (former C&O) Railroad tracks from Harts, WV. This site is part of the old Isaac and Aaron Adkins farm. 24 May 2018. 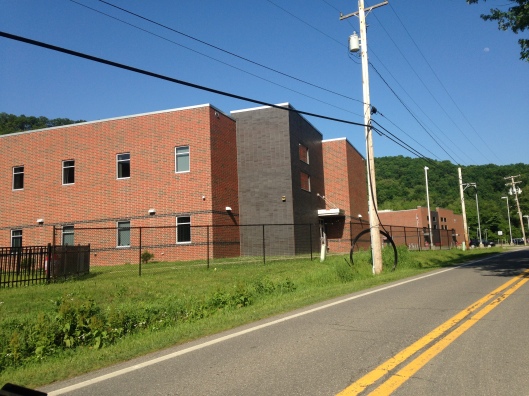 Here’s a cramped view of the new Harts PreK-8 School, built on what was once the Paris Brumfield farm. Charley Brumfield’s family owned this property from the 1890s until several years ago. 24 May 2018.

The following deed index is based on Deed Book 57 at the Lincoln County Clerk’s Office in Hamlin, WV, and relates to residents of the Harts Creek community. These notes are meant to serve as a reference to Deed Book 57. Researchers who desire the most accurate version of this material are urged to consult the actual record book.

Note: I copied all of these deeds.

The following deed index is based on Deed Book 50 at the Lincoln County Clerk’s Office in Hamlin, WV, and relates to residents of the Harts Creek community. These notes are meant to serve as a reference to Deed Book 50. Researchers who desire the most accurate version of this material are urged to consult the actual record book.

Note: I copied all of these deeds.

An unknown correspondent from Harts in Lincoln County, West Virginia, offered the following items, which the Logan Banner printed on January 14, 1927:

After all the sadness and sorrow Harts has mingled back again.

Mrs. Charles Brumfield is looking after business matters in Logan this week.

Herbert Adkins was a business caller in Huntington Monday.

Hawkins Perry is our new operator here this week.

Wonder why Dr. Ferrell of Chapmanville is so interested in Harts now?

Mrs. Beatrice Adkins from West Fork was in Harts Saturday.

Miss Jessie Brumfield is progressing nicely with her school at Atenville now.

Bill Adkins will leave here soon for Valparaiso, Indiana where he will be engaged in school for some time.

Robert Dingess of Whirlwind was a business caller in this town Monday.

Robert and Joe Brumfield are looking after business matters in Logan this week.

Fisher B. Adkins was in Hamlin Monday looking after his contest which will come off the March term of court.

Tom Brumfield seems to be very much pleased these days. Wonder why? Guess the wedding bells will ring soon.

Bill Adkins from Coal Branch City was in town Monday.

An unknown correspondent from Harts in Lincoln County, West Virginia, offered the following items, which the Logan Banner printed on November 2, 1926:

Everybody is very busy electioneering for E.F. Scaggs and J.M. Marcum here.

Attorney Lace Marcum of Huntington spent the week with Charles Brumfield and family.

Robert Brumfield is seriously ill at this writing.

Enos Dials seems to be all smiles these days. Wonder why? I guess he has got a sweetie after all.

Miss Clara Adkins was the guest of Mrs. Bill Farris at Atensville Friday.

Jack Marcum of Ranger was in town Saturday.

Mrs. Beatrice Adkins of the West Fork was in town Saturday.

Ed Brumfield was calling on one of his best girls at Toney Sunday.

…progressing nicely with her school at Atensville.

Hendrix Brumfield is very busy these days telling the folks why he is a Democrat.

We have been informed today that Fed Adkins, a Democrat, has turned over to be a Republican now.

Message was received today that Miss Perva B. Johnson has arrived safely in Chicago.

Hallie Holton of Charleston is the guest of friends and relatives here. 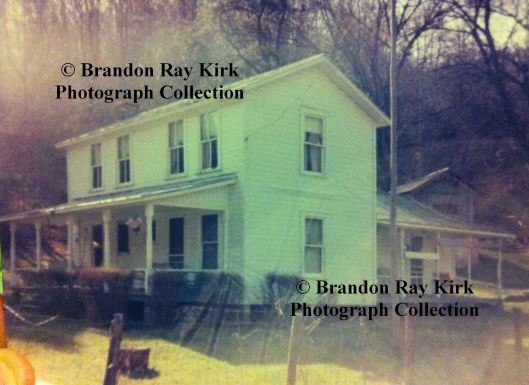 Jessie Brumfield (1902-1997) was the daughter of Charles and Caroline (Dingess) Brumfield. She was educated at Morris Harvey College and taught school for many years. This home stood across Route 10 from the new Harts Middle School in Harts, Lincoln County, WV.

An unknown local correspondent from Harts Creek in Logan County, West Virginia, offered the following items, which the Logan Banner printed on May 21, 1926:

How do you do, old Banner? Glad to see you again.

We are having some rainy weather at this writing.

Jake Workman, of Holden, is visiting his parents of this place this week.

Gillis Adams of Monaville spent the weekend with homefolks of Hoover.

[cropped]… ill for the past week or so but is able to be out again.

Born to Mr. and Mrs. Cecil Brumfield, a baby girl.

Mrs. Roxie Workman of Holden has returned home from a visit with her parents of Queen’s Ridge.

[cropped]…downhearted Sunday? Cheer up, Freda, maybe it’s not so.

Mr. and Mrs. Robert Dingess was out car riding Sunday.