A correspondent named “Bluebird” from Whirlwind at Harts Creek in Logan County, West Virginia, offered the following items, which the Logan Banner printed on February 16, 1923:

Quite a number of people are on the sick list in this vicinity at this time.

Grover Adams has been busily engaged in the hunting business this winter.

Sol Adams of Mount Gay has been visiting relatives on Hoover recently.

Wonder if James Robert has ever let Pusher Blair ride his grey anymore?

The singing school on Trace is progressing nicely.

Victoria and Joe Kirk were out horseback riding Sunday.

Mr. and Mrs. John H. Mullins have been visiting relatives on Hart.

Mr. Samuel Vance of Twelve Pole was a business visitor to this community recently.

Harve Smith and John Fillinger have been having some fine sport fox hunting this winter.

Everybody has been wondering what has become of Ichabod Crane.

Van Mullins of this place is at Cherry Tree on the sick list. We hope that he will soon recover and return home.

Bud Richards is going into the mercantile business near the mouth of Smoke House.

Ratio. Don’t be afraid. The bull dog won’t hurt you.

Here we come with a few lines and frost bites; also Herbert Thompson is mourning on the Perrite Hill.

Daniel McCloud is getting ahead of the working.

I wonder what has become of James Baisden? I haven’t heard from him in a long time.

Ichabod Green said he was as fat as a bear.

Wilburn Mullins cranked up his old crippled Fork and went to church.

Ad Mullins is coming back to Hart. He knows Will Maggard won’t let Browney alone.

Van Mullins is swinging his broad hoe. He swore it was summer time.

Antha Adams is visiting relatives on Hart this week.

Roy Browning likes to win gold off the punch board.

Wonder if the Cherry Tree girls have quit asking for kisses from the Harts Creek boys?

Mrs. Frank Adams is very ill and has been for some time.

Wayne Adams is moving back to the old town.

A correspondent named “A Hard Nut to Crack” from Harts Creek in Logan County, West Virginia, offered the following items, which the Logan Banner printed on March 16, 1923:

Harts Creek is improving every day as so many people are exiles. Harts Creek has such a reputation—it is only the people, not the place at all, so maybe those who have not left are very industrious. Most of the people have exited to Cherry Tree.

A list of people who left for the city, some who have gone quite a while: Bill Mullins, Carl Wellman, Dutch and Cotton, and Mr. B.A. Adams, so I am in great hopes of a better place here.

The Cherry Tree “gluks” say Harts Creekers can’t hurt them. I don’t doubt the fact, honey, for when you said there were so many cherries in Cherry Tree you told the truth. I honestly hope you who wrote that haven’t swallowed one for you would look green the remainder of your days. “Yes, you are swinging in the sunshine.”

Mae Copperhead was seen going through the alley the other day. She was very happy. She was singing “Camrod” in a low sweet tone; it filled the whole universe with harmony.

Miss Anna Adams is attending Logan High School. We wish her much success.

Come on with your news, Ginks, and help complete the Banner. You didn’t write enough. Please write more next time.

As we have begun writing, I suppose we had better not stop, so here goes.

Miss Ora Mullins is very ill at this writing.

Mrs. Baisden is also on sick list this week.

Harts has such a terrible rep. I’m sure some would reverse their opinion if they would just visit our singing school.

In my opinion, Harts Creek is as good or maybe better, than any place I know. Come on Harts Creeker, and help me cheer Harts.

Strawberry shortcake
Huckleberry pie,
V-I-C-T-O-R-Y,
Are we “It”?
I say yes.
–Citizens of Harts Creek school

Howard Adams, Eula Adams, Anna Adams, and Nora Adams all have gone back to Logan to attend school.

Mrs. Shirley Mullins is conducting a good school on Buck Fork. We really appreciate her work and wish to thank her.

How many know that there is to be a wedding in this hamlet soon? You don’t know? Well, how do you like the way you found out?

Miss Weltha Mullins has been visiting her parents of this place.

Some of the people in Logan seem to think that the people on Harts Creek never saw a car. Pahaw, fella. They make ‘em climb trees in our burg. 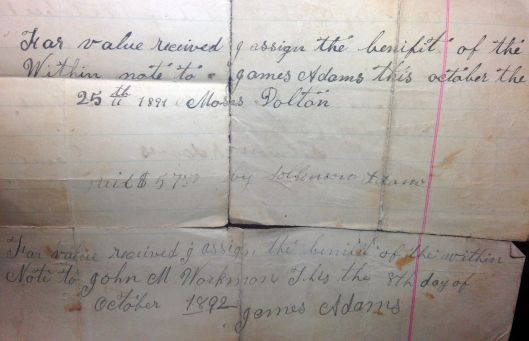 An unknown correspondent from Queens Ridge (Harts Creek) in Logan County, West Virginia, offered the following items, which the Logan Banner printed on May 13, 1927:

Mrs. Belle Dora Adams is going to have a son-in-law, some one said. Gee, the girls will have to quit flirting with Charley.

Howard Adams made a business trip to New Orleans. Many tears were shed on account of his own absence.

From the Logan Banner of Logan, WV, comes this story about Harts Creek moonshiners dated February 1, 1927:

Mash In Abundance is Located But Shiners Are Wary, Alert and Fleet.

Prohibition officers, federal and state, made sweeping raids along Harts Creek last Thursday. Two moonshine stills complete and part of another, together with 900 gallons of mash and 12 gallons of moonshine were seized and destroyed. Operators of the stills escaped the dragnet.

An 80-gallon copper still was found in operation by the raiding agents at the mouth of Buck Fork of Harts Creek, along with 400 gallons of mash and eleven gallons of moonshine. No one was at the still when the officers arrived, according to the latter, but later two men approached carrying sacks of half-gallon fruit jars. At sight of the officers, they turned and fled, escaping.

A 36-gallon capacity still, 300 gallons of mash, and a small quantity of liquor were found by the officers on Smoke House Fork of Harts Creek. Three men fled from the scene on approach of the agents and made good their getaway. Forty-two empty one-half gallon fruit jars were also found there and destroyed.

In the same locality the officers found the worm and other parts of another moonshine still, together with 200 gallons of mash.

From the Logan Banner of Logan, WV, comes this story about Crawley Creek and Harts Creek moonshiners dated April 8, 1927:

An all-day raid Tuesday on Crawleys and the upper reaches of Harts Creek by five officers resulted in the capture of three stills and 22 barrels of mash.

Five shiners were seen at a distance working around a still but they were able to escape and take their still with them owing to their better knowledge of the country. A couple of shots were fired at the man who carried the still but he “carried on” with a stout heart and saved his “mint.” This was on White Oak of Harts.

This raiding party was made up of Prohibition Agent Ed Hensley, Deputy Sheriff Henderson Maynard and State Policeman Rowe, Wilson, and Russell. They went to the head of Mud Fork Tuesday morning and scouted along the ridges, reaching Henlawson late in the day where a car awaited them to bring them home.

The signal system along Crawleys and Harts works so effectively, it is said, that it is nearly impossible for the officers to catch a moonshiner at his still or get hold of any of his product, although stills and mash are often found. If the officers raid the country in daylight they are seen and warnings are sent out in various ways to all concerned. If they travel at night, they must use lanterns or flashlights which are of course detected and reported.

Benjamin “Ben” Adams (1855-1910), son of Joseph and Dicy (Mullins) Adams, was a prominent logger, splasher, distiller, and tavern operator at Warren-Spottswood in Logan County, WV. He was a key participant in the Lincoln County Feud. 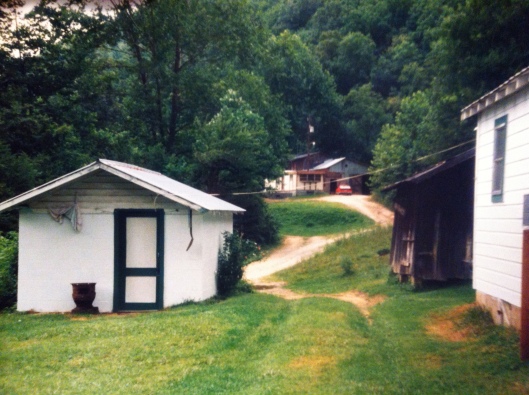 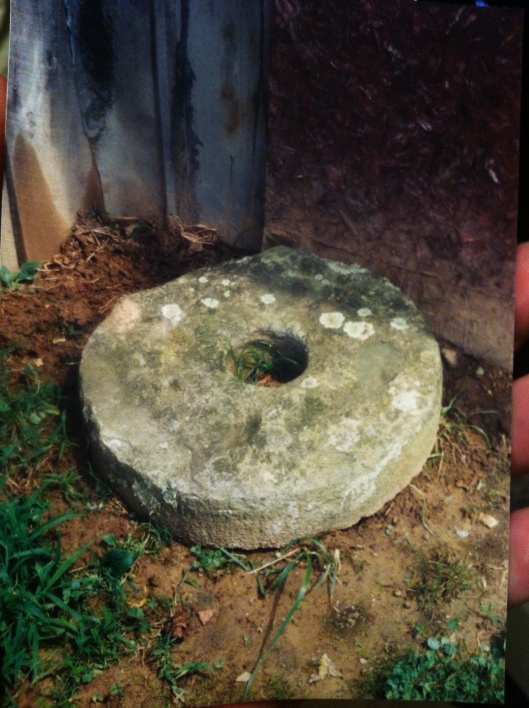 Teachers identified the following schools in Chapmanville District of Logan County, WV, and offered a bit of local history in 1927:

“Harts Creek derived its name from Steven Harts, said to have been killed by Indians on the creek.”

“All fought on the Confederate side” during the Civil War. One man gained great merit from our district as a marksman with the American marines during World War I.

“Sent several soldiers to help the South.” The fork is named for a Brown who lived at its mouth.

A Church of Christ exists nearby. Three local men served in the Confederate Army. One local soldier lost both hands in World War I.

The first house built on Smoke House Fork at its mouth had no chimney for quite a while and smoked badly.

“This district furnished a lot of Civil War veterans and played her part.”

“East Fork named on account of its being the most Eastern fork of Harts Creek.” One local soldier served in the Confederate Army.

A Christian Church exists in the vicinity. Four local men served in the Confederate ARmy. “Harts Creek named from Steven Harts murdered by Indians.” Three boys went from here and one was wounded at the battle of Argonne.

Under the Tim’s Fork entry, it says that John Dingess was killed in battle at Cloyd’s farm. Tim’s Fork is named for Timothy Dwight, who lived there.

No permanent churches exist locally; people meet occasionally in one of the school houses. Four local men served in the Confederate Army. “Piney was named because of so much pine growing there.”

Marsh Fork derived its name from the marshy land near its mouth.