A correspondent named “Chums” from Whirlwind at Harts Creek in Logan County, West Virginia, offered the following items, which the Logan Banner printed on February 2, 1923:

The post office at Enzelo has been discontinued. Someone will have fun going to Halcyon.

Several families have been attacked with flu and diphtheria in this neighborhood.

Randolph’s visit was very brief. She didn’t talk to suit him.

Why is Troy staying in Cherry Tree so long? Come back, Troy. You’ll receive some warm welcome.

Mrs. C.H. McCloud and three daughters were seen passing down the road yesterday.

Charley Mullins has been on the sick list but is recovering.

There was a grand meeting at the Mt. Era church Sunday.

Good luck to the Banner.

A correspondent from Halcyon at West Fork of Harts Creek in Logan County, West Virginia, offered the following items, which the Logan Banner printed on March 23, 1923:

Out in the air

Out away from town

Away out in the country

Where the trees and birds are found.

There is where my heart is bent

There satisfaction hangs all around

It even blossoms from the ground.

There is where the Julip bees

Are humming among the trees.

There is where old Barley Corn

Is pouring from his lavish horn.

Hump! And you will say

You just don’t know as well as I

Ere the country you would come and try.

The stork visited the home of Mr. and Mrs. Cecil Workman March 13th and left a fine boy.

Lawrence Mullins is the proud possessor of a grandson.

A correspondent named “Smiles and Cheers” from Halcyon on Harts Creek in Logan County, West Virginia, offered the following items, which the Logan Banner printed on March 2, 1923:

(Too late for publication last week.)

Tom Baisden has started a big job. I think he calls it making sugar. Hustle in, boys, those who want a position.

Albert Richards and his intended were out for a stroll Sunday.

Everyone sure does miss Jerona.

Roxie Mullins and her new beau were out for a walk Saturday evening.

Roxie and Mandy Mullins, Ida and Pearl McCloud, Mattie Carter, and a number of others, attended a funeral Friday morning at the Hensley cemetery.

Good luck to the Banner.

A correspondent named “Jennings” from Halcyon on Harts Creek in Logan County, West Virginia, offered the following items, which the Logan Banner printed on August 11, 1922:

Miss Freddie Dingess and Miss May Cooper were visitors in Halcyon this week. The girls seemed to enjoy themselves very much. They went in bathing in the creek, rode a log, turned turtle, went barefooted, rode a mule and so on. They sure were a jolly couple. They took back to Shamrock bottom lots of sunshine. Most of the people take back moonshine.

Miss Tom Dingess from the Logan hospital and Von Dingess of Shamrock Bottom were visitors in Halcyon recently. The jolly things they did were innumerable and is believed they took away both moonshine and sunshine to Shamrock valley.

Everything is unusual around here. We have good crops of which we are reaping the benefit of now. All are jolly and the goose is hanging high.

A correspondent named “Aunt Meg” from Halcyon on Harts Creek in Logan County, West Virginia, offered the following items, which the Logan Banner printed on September 22, 1922:

Times are good and everybody happy and gay in the old town, but as some of us have never purchased our winter shoes our toes have begun to smell jack frost.

There is some town gossip that Everett Dingess will return to Pennsylvania with his wife and baby where he has spent a few years.

Miss Hattie Dingess has left our town and will teach school on Caney for a few months.

Our home school is progressing nicely under the supervision of Mr. Chas. Gore as teacher. His motto is: “Do good and leave moonshine alone.”

Pete, you walk as if you had spent your past few days in the White House. Has she gone back on you?

Mr. W.W. Gore of Holden spent the weekend with his brother, Joe Gore, of this place.

I wonder why Lee Dingess rides so fast up the hill on his way to the ‘ville. Ask Kris. She knows.

Harvest time has come, boys. Shake off your sleepiness and go to work.

Good luck to the Banner and readers. 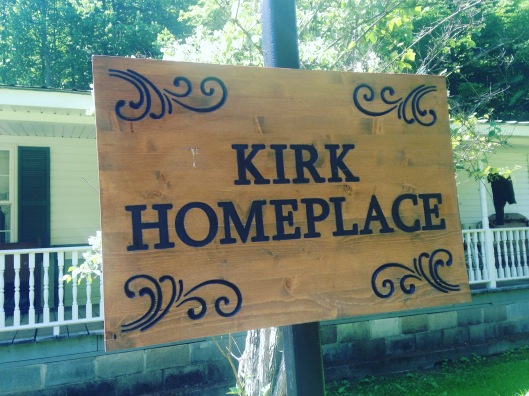 Heading up to the cemetery. 24 May 2018. Melvin was a powerful left-handed timberman. In 1888, he bought a 35-acre farm from Floyd Caldwell. 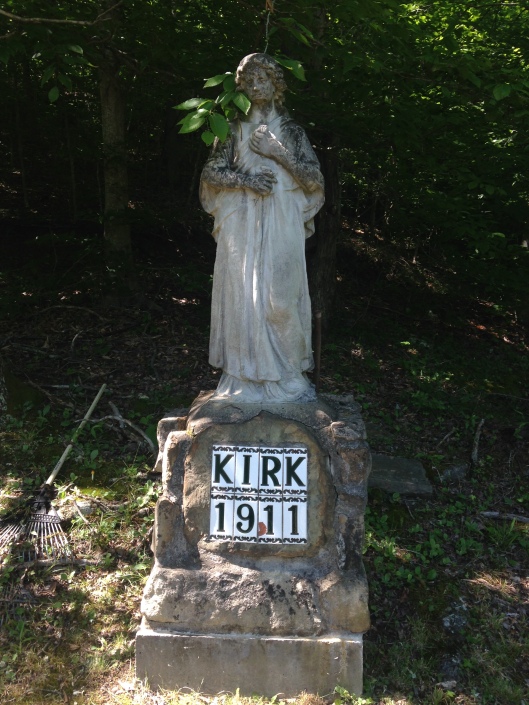 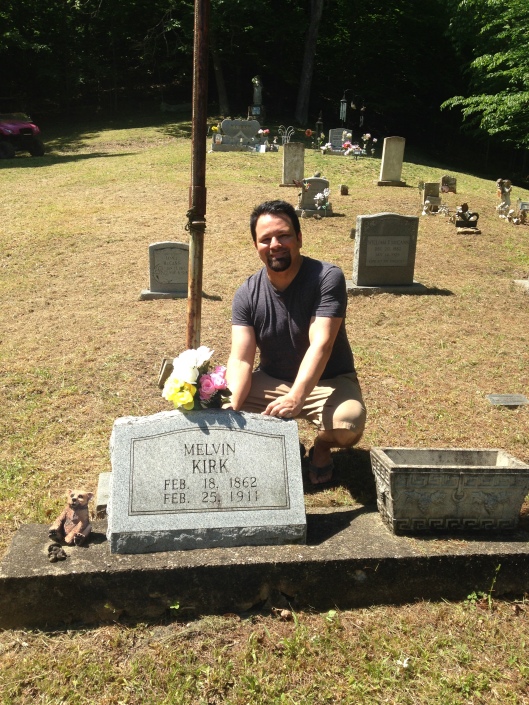 From the Logan Democrat of Logan, WV, comes this story titled “Sheriff Hurst and Registrars Ready to Enroll,” dated May 24, 1917:

Sheriff Hurst Wednesday gave final instructions to his sixty odd registrars who will enroll all men between the ages of 21 and 30, for military service as ordered by proclamations of President Wilson and Governor Cornwell for June 5, which will be a legal holiday in West Virginia as in other states.

On June 5, all male citizens are required to go to their regular voting places between the hours of 7 a.m. and 9 p.m. and fill out a blank similar to the one printed in today’s Democrat. The governor has requested that all other public business be suspended on that day and that patriotic parades of school children be held. He also asks all owners of automobiles to help transport to the voting places men of military age and that every assistance possible be given the officers who will make the registration.

As soon as the registration in Logan county is completed, the result will be telegraphed to Washington and then the machinery will be set in motion to select those who will be included in the first call for 500,000 men who will begin training in September. A board will sit in Logan who will select the available men to enter the first army. An absolute, fair and impartial administration of the law is insured as the local board will be directly responsible to the federal authorities and subject to stern penalties should any favoritism be shown. The state officers have nothing whatever to do with the army after the work of selection is completed. Those who will form the local conscription board are:

The president in his proclamation ordered all men, 21 to 30 years old, excepting those already enlisted, shall voluntarily present themselves at the places to be designated for registration on June 5. Other main features of his orders follow:

Men away from home may register by mail.

Penalty for refusing to register; up to a year imprisonment.

All federal, state, county, city and village officers are liable for service for registration and draft.

Any person making a false statement to evade service or any official aiding in such an attempt, will be punished by a year’s imprisonment through civil authorities or by military court martial.

The main parts of the president’s proclamation in which he explained the necessity for conscription follow:

“We are arrayed against a power that would impose its will upon the world by force.

“The man in the factories or who tills the soil is no less a part of any army than the man beneath the battle-flags.

“We must shape and train for war, not an army, but a nation.

“The sharpshooter must march and the machinist must remain at his levers.”

The whole nation must be a team in which each man shall play the part for which he is best fitted.

“It is not conscription of the unwilling but a selection from a nation which has volunteered in mass.”

Sheriff Hurst has volunteered to do his part of the work in registration without cost to the federal government. The other registrars will do the same. No trouble is expected in enrolling the entire military population of the country.

Dad and I recently cleared the Bryant-Dingess cemetery at Bearwallow Gap in the head of Piney Fork and Hugh Dingess Hollow on Harts Creek, Logan County, WV. I last visited this cemetery over twenty years ago. 27 January 2018. 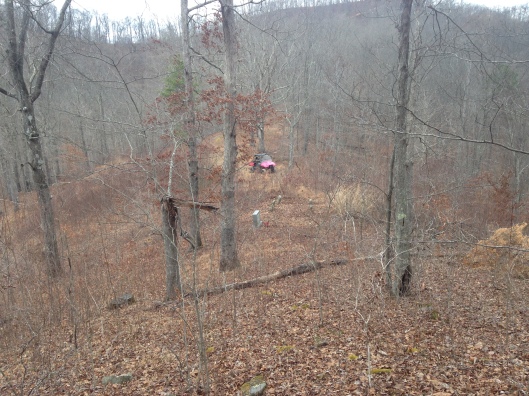 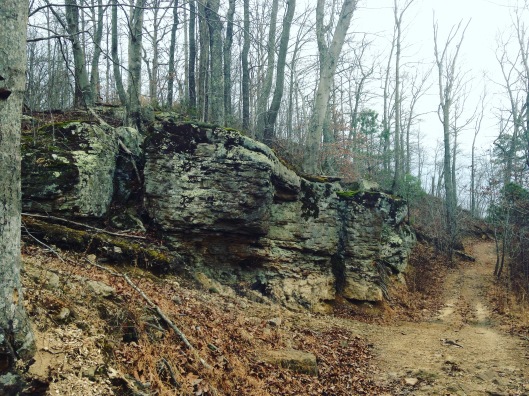 Up above the cemetery are these magnificent rocks. 27 January 2018.

Looking from the rocks down into Hugh Dingess Hollow of Smokehouse Fork of Harts Creek. 27 January 2018.