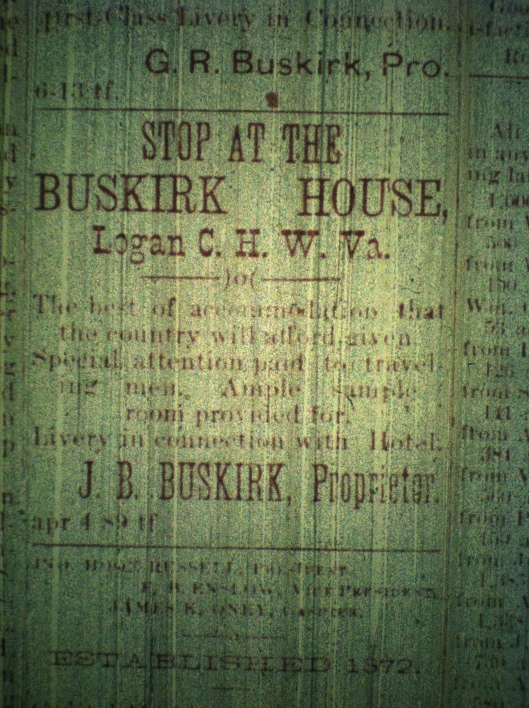 An unknown local correspondent from Leet in Lincoln County, West Virginia, offered the following items, which the Logan Banner printed on June 27, 1924:

We are at this writing having some beautiful weather.

We are glad to see Mr. and Mrs. Charley Lucas moving back in town again.

Mr. and Mrs. Lonnie Lambert will make their future home at Wilbur, W.Va.

Mr. Walton and Ossie Dial were visitors in Leet, Sunday.

Misses Lena and Edith Frye were out horse back riding Sunday.

Miss Lizzie Payne made a flying trip to Huntington, W.Va.

Mr. and Mrs. Bruce Hatfield are leaving for Wilburn, W.Va. 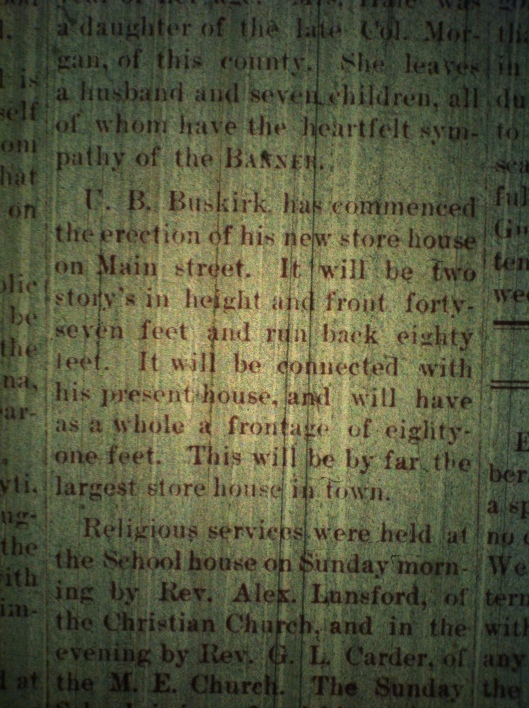 An unnamed local correspondent at Whirlwind in Logan County, West Virginia, offered the following items, which the Logan Banner printed on 01 May 1925:

Uncle Tom Tomblin has been very ill for some time.

G.R. Claypool and Joe Blair have started to build a road down Harts Creek. 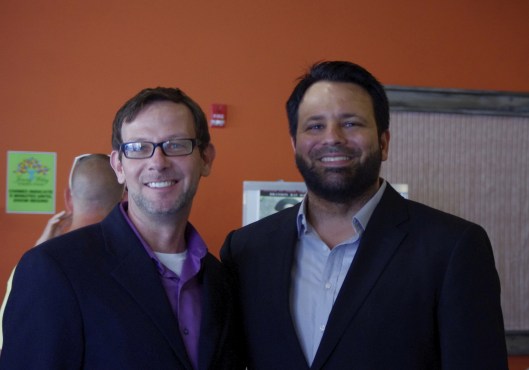 Here I am earlier today with Tony Tackett, Pike County (KY) Tourism Director, at Jenny Wiley Theatre in Pikeville, KY. Tony and his associates are unsurpassed in what they do. Many thanks to Tony and Pike County Tourism for inviting me to the Diggers premiere. It was a great time. 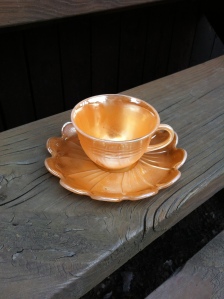 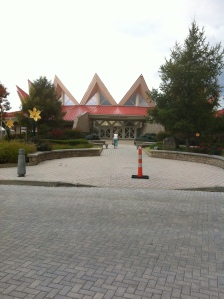 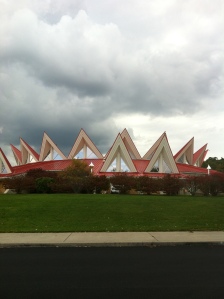 “Blood in West Virginia: Brumfield v. McCoy” is available for purchase at Tamarack

Let me try to describe John’s hands. They were very small in every way. He had frail hands as a gentleman might have, with little hair on them. I don’t recall that his fingers were unusually long. His knuckles were slightly larger than his actual fingers, maybe because his fingers were so thin. He kept his fingernails clean and filed smooth with a file. I remember he often filed his nails while on the bus during road trips; sometimes he filed his nails when conversations barely held his interest, half-listening. He absolutely never bit his fingernails. He seldom used his hands for any type of physical work because he didn’t want to risk hurting them; they were, he said, what paid the bills. The skin on his hands was somewhat loose and pale. When you shook his hand, it was very soft, although I’m sure he had slight callouses on the ends of his left hand fingers from playing the fiddle nearly every waking minute of the day. When I first met John at Morrow Library, he shook my hand and insisted that I call him John, not Mr. Hartford. When I later visited his home in Nashville during the summer for weeks or a month, before I had moved to Nashville, he would always shake my hand before I left for West Virginia. I recall at the end of my first trip how he stood in his driveway between his house and the guest house and remarked that we shouldn’t say goodbye because we would see each other again. John did not particularly like goodbyes; he preferred until next times. At the end of his life, upon commencement of his chemotherapy, he would shake very few people’s hand. Due to the chemotherapy, he was particularly concerned about germs. At that time, we shared a laptop and I always took care to clean the keys with alcohol before passing the laptop to him for manuscript review. I did this because I did not want to pass germs and make him ill; he never asked me to do it. Actually, I recall times he told me that it wasn’t necessary, but I did it anyway. Almost always, if he met someone at an event, they would greet him with a handshake, which he had to decline. It was awkward and in a peculiar way I think he enjoyed it. I may be mistaken, but it seems as if he contemplated or did in fact wear gloves for a short time just for handshakes. On a few occasions, he complained about having shaken hands with stout men who nearly crushed his hand; he detested an unnecessarily firm handshake because he said it might affect his ability to play. Later, after I moved to Nashville and visited and stayed many days and nights in his home I observed and he said that one of his favorite things to do was to sit with Marie on the bedroom couch at night and hold her hand while the two of them watched television. These were, of course, private moments and I only intruded if I had a question about the manuscript or a related matter. John’s wrists were small. He never wore a watch on his wrist, preferring instead to keep a pocket watch – usually tucked in his overalls front pocket or in the pocket of his vest, which he nearly always wore. If I remember correctly, his watch was colored gold, not silver. When I think of his hands, I see them holding a fiddle and bow at the dining room table and on stage, I see them moving across a banjo, I see them holding a fork and knife at dinner, I see them placing tiles on a Scrabble board during our games together, I see them holding a glass of red wine late at night during our conversations, I see them holding a book or a magazine at the couch by the fireplace, I see them gripping the wheel of his Cadillac on our way to Piccadilly Cafeteria, I see them pushing PLAY and turning up the volume on his car stereo…

Goldenseal magazine’s summer edition has featured a small review of the book; thanks to retiring editor, John Lilly

Goldenseal offered treatments of the Lincoln County Feud in 1986 and 1992; Goldenseal helped inspire me to write the book

Here I am during a recent visit with my friend Faye Smith, the granddaughter of Spicie (Adkins) McCoy-Fry

John Hartford’s home, Madison, TN. John liked to sit on a wicker sofa on this porch and read while listening to music through his earphones.

In 1979, Roxie Leana (Dalton) Adkins, daughter of James and Viola (Tomblin) Dalton, wrote a history of her family, which includes memories of her early life on Harts Creek. Roxie, born in 1904, married Willis Adkins in 1924 and mothered nine children. In the late 1990s, Roxie’s daughter Emerald (Adkins) Fleming gave this history to me.

I got married three years later and started a family of my own. I was married to Willis Adkins, son of John and Caroline Nelson Adkins. I was married May 29, 1924. I started housekeeping in the head of Big Branch right in the woods in a little three room house — a shack — and that was a happy time for it was mine and Willis’ private life and we had each other and I would love to go back to that lowly summer I didn’t have anything to worry about. So that is a big part of my life history and we planted a garden. We had plenty of fruit and berries and peaches, cherries and apples and we had a joy beyond compare for we didn’t have no children. Eighteen months later we had our oldest child, Carrie Adkins. She was born November 30, 1925.

Then we moved to Logan County. Willis worked for Appalachian Power Company at the Logan Plant then he went to the coal mine and we moved from Mud Fork to Switzer, W.Va. and we lived there from November 1926 to May 1927. Then we moved to a lumber camp at Omar, W.Va. We stayed there to March 1928. We moved back to Big Branch and raised a garden and a crop of corn and moved back to the lumber camp in January 1929 and March 28, 1929 our first boy was born: Denver Adkins. We stayed in the lumber camp until September 1929 and moved up Pine Creek to a mine camp.

In October 1929 we moved back to the farm we live on now and rented then and a year later we bought the land off my uncle Ed Dalton and I am still here. I had 7 more kids and put them all through high school and I was very proud of all of them. I tried to see they got good treatment in school. They weren’t rich and they wasn’t the poorest people in our country but I always taught them to be kind to others and to treat their teachers with respect and to always be kind to old and young and do their best to keep all their promises.

I am now 75 years old. My husband passed away June 9, 1968. I was 64 years old and I am still in my own home. If it be the Lord’s will, I will live in this same house until I go. My children all got married and had families. Denver doesn’t have any children and one of my boys — Arnold Adkins — was killed by a train in Huntington in 1966. He had a wife and two children and was expecting the third and I trust they will be as honest and respectful as he always was. He had a host of friends.

Well, this is about all I can write for now.

Enos “Jake” Adkins clock. Jake Adkins (1825-1907) purchased this clock and a barrel of dishes from a riverboat that came up the Guyan to Ferrellsburg, WV. 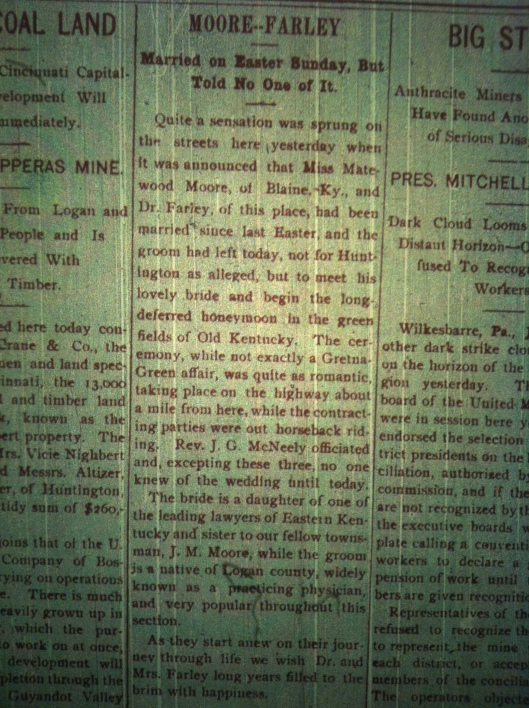