Deed Book 56, page 41, Lincoln County Clerk’s Office, Hamlin, WV. NOTE: Al Brumfield was literate; he signed this document with an “x” because he had gone blind by 1903. 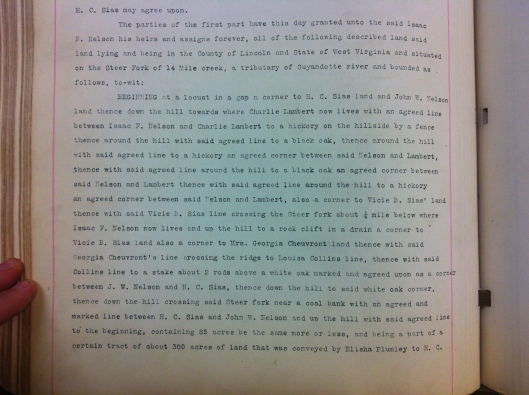 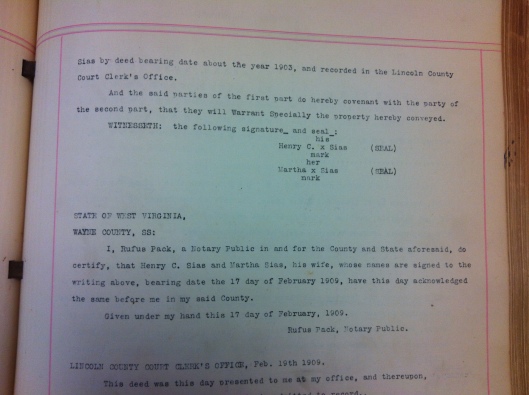 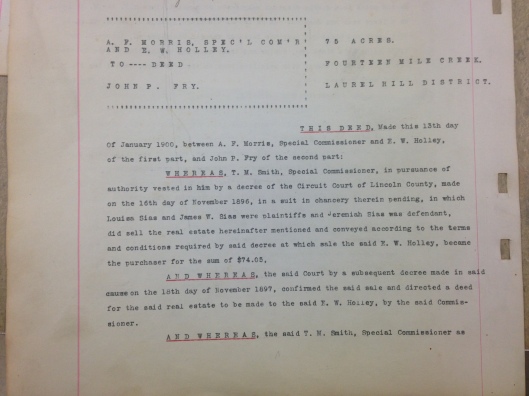 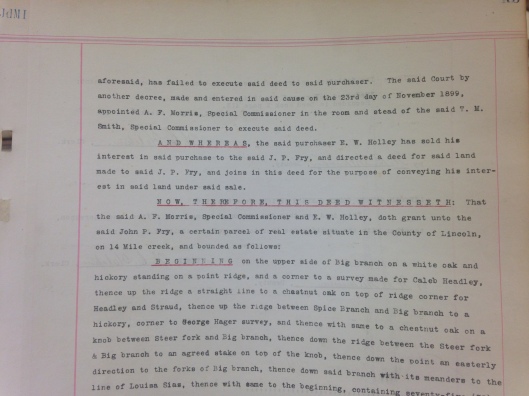 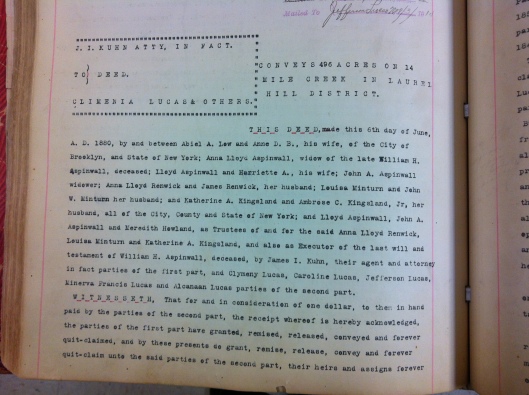 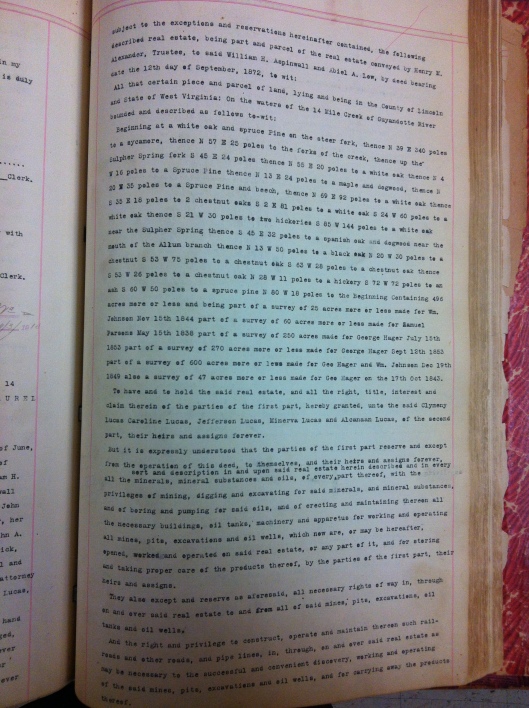 Arena (Elkins) Headley, daughter of Joseph Marion and Nancy Emarine (Elkins) Elkins and wife of Jesse F. Headley. Arena is a sister to my great-great-grandmother, Emily (Elkins) Sias. She was born in 1898 and died in 1987. 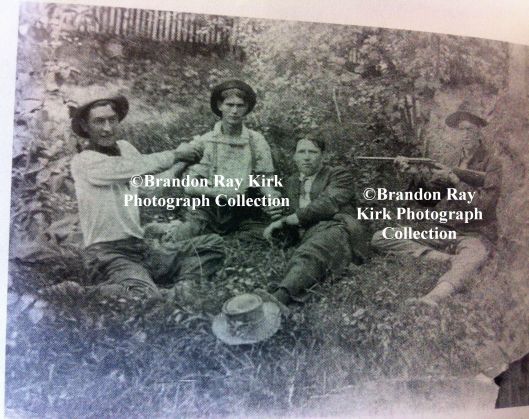 This is the most southern subdivision of the county. It derives its name from Harts creek, a tributary of the Guyandotte river. On the north is Laurel Hill district, on the northeast is Jefferson, east Boone county, on the south Logan, and on the west Wayne. Guyandotte river flows northwest and divides the district into two nearly equal parts. There are several small streams, among which are Little and Big Harts creeks, Little and Big Ugly creeks, Kiahs creek, and Fourteen Mile creek.

The first settler was Richard Elkins, who reared his cabin in the month of September, 1807. Here he removed his family, and here Charles Spurlock became his first neighbor. Other early settlers were: Esquire Toney, John Lucas, Edley Elkins, John Fry, Hezekiah Adkins, John Brumfield, and Richard Adkins. Rhoda, a daughter of Edley and Sarah Elkins, was the first white child born in the district. The first grist mill was built  by James White about the year 1821. It was a small tub-wheel mill, water being the propelling power. Isaac Elkins built the first saw mill in 1847 or 1848. It was constructed on the old sash-saw plan, and had a capacity for cutting from 800 to 1,000 feet per day.

The first school was taught in a log cabin one mile above the mouth of Big Harts creek about the year 1832, but who the teacher was cannot now be ascertained. The date, however, is remembered by an old resident, because it was the year in which he first visited this section. The first house for educational purposes was built near the mouth of Big Harts creek in 1834. It was a five-cornered building, one side being occupied by the ever-present huge fire place. There are now ten public school houses in the district, “some of which,” says an informant, “are in bad condition, but will soon be replaced by frames;” 334 boys and girls attend school in this district.

The first sermon was preached here in the year 1823 by a Methodist minister named William West, and here the same year he gathered a little church, one of the first ever formed in the valley of the Guyandotte river; but of its history or who composed its membership, nothing is known. When the writer asked of an old settler the question: “Who were the first members?” his reply was: “The register is gone, and no one living can tell.” When asked who organized the first Sabbath school, he replied: “There never was one in the district.”

Has for nearly fifty years been a practicing physician. He was born in Pennsylvania in 1808, and his parents Thomas and Sarah (Asher) Headley, are both deceased. Caleb Headley has been twice married, his first wife, Nancy Wright, a Pennsylvanian, left him eight children: Elizabeth J., born June 2, 1829; Thomas J., November 23, 18931; Sarah A., December 8, 1833; Caleb S., March 30, 1838; George W., May 21, 1839; Benjamin F., May 31, 1841; Anthony, June 3, 1844; Elisha, born August 1, 1850. Mr. Headley was again married in Catlettsburg, Kentucky, to Sarah A. Farley, and the children of this union number six, born as follows: John T., April 20, 1867; Ida C., March 23, 1869; Caleb D., February 22, 1872; William F., August 25, 1875; Margaret, March 28, 1878; Ballard C., April 14, 1880. Mrs. Headley was born in Logan county, (now) West Virginia, May 26, 1849, and her parents, William and Elizabeth Jane (Clark) Farley, settled in Lincoln county in 1844. Caleb Headley came to Lincoln county in 1866, and is now a prosperous farmer, owning 600 acres of good land on Fourteen-mile creek, a portion of which is heavily timbered with oak, poplar and pine; coal and iron ore in abundance. There is a fine sulphur spring upon the land, on the creek three miles from Guyan river, which has been visited by people from many parts of the United States, and it is pronounced of excellent medicinal quality by all. Dr. Headley was commissioner of revenue one term, and was justice of the peace sixteen years in Wetzel county, West Virginia. He was in the late war, and ranked as captain of a company. Dr. Headley was a member of the Methodist Church for forty years, but on coming to Lincoln county, there was no church of that denomination, and he united with the Christian Church. His father was also a physician for many years. Direct mail to Fourteen, Lincoln county, West Virginia.

The following deed index is based on Deed Book 56 at the Lincoln County Clerk’s Office in Hamlin, WV, and relates to residents of the Harts Creek community. Most notations reflect Harts Creek citizens engaged in local land transactions; some reflect Harts Creek citizens engaged in land transactions outside of the community. These notes are meant to serve as a reference to Deed Book 56. Researchers who desire the most accurate version of this material are urged to consult the actual record book.

NOTE: I copied all of these deeds.

The James Wilson Sias Family Cemetery, which I visited on 23 April 2016, is located in the head of John P. Frye Hollow of Sulphur Spring Fork of Fourteen Mile Creek in Lincoln County, West Virginia.

rock headstone or footstone for (*)

NOTE: I will continue my research to determine who is buried in this cemetery.