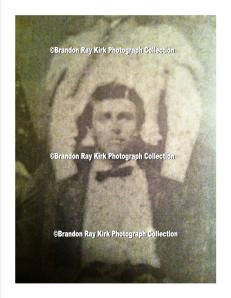 George Fry, resident of Green Shoal and reluctant host of the Brumfield mob in October 1889

During the War Between the States, the Chapmanville area of what is today Logan County, West Virginia, strongly supported the Confederacy. Logan County’s loyalty to the Confederacy was quite overwhelming. Its citizens supported secession and opposed the creation of West Virginia. Well over ninety-percent of all local veterans were Confederates. A few local men, however, did serve in the Union Army. At least seven Yankee soldiers lived in Chapmanville District after the war.

In June of 1890, Edwin F. Mitchell, enumerator of the federal census, made his way through Chapmanville District gathering information about local residents who had served in the U.S. Army, Navy, and Marine Corps during the late war. He ultimately compiled a short list of residents who had served the Union cause: Sidney T. Woody, Patterson Riffe, Martin Van Buren Prince, William Kelley, Robert Vanderpool, John Rose, and Allen K.M. Browning. It was a mixed bag of Yankees with hard-to-read loyalties. At least four of them were post-war settlers of the Chapmanville area, having served in Tennessee or Kentucky units. One of these migrants was an unenthusiastic Yankee who had been pressed into service by Federal troops. And of the two pre-war Logan County residents — Riffe and Prince — one served in both Confederate and Union military units. Regardless, these seven men reflected a very small percentage of the local population. In 1880, according to census schedules, Logan County had a population of 6,170 male residents and 1,795 families.

Sidney T. Woody, the first veteran listed by Mitchell in the 1890 census, was born around 1852 to Sidney and Anna (Tyree) Woody in North Carolina. During the war, from 1864-1865, he served as a private in a Tennessee regiment. By 1870, he was a resident of Logan District with his parents. In 1874, he married Sally Ann Handy, a daughter of William and Charlotte (Doss) Handy, in Logan County. They were the parents of at least ten children. Woody initially lived in Logan District with his family but spent his last years in the Chapmanville area.

Patterson Riffe, the second veteran identified in the 1890 census, was born on April 18, 1844 to Peter and Jane (Perry) Riffe in Logan County. In 1867, he married Martha B. Thomas, a daughter of David and Margaret (Mullins) Thomas, in Chapmanville. They were the parents of at least eight children. Early in the Civil War, Riffe served in Company A of the 1st Cavalry State Line (Confederate). In the latter part, from April 15, 1862 until August 8, 1865, he was a private with Company I of the 7th West Virginia Cavalry (Union). According to military records, Riffe was six feet tall with a fair complexion, gray eyes, and brown hair. He suffered a war-related injury caused by a horse falling on his leg. Riffe and his family were listed in the 1870, 1880, and 1900 censuses as occupants of Chapmanville District. He died on January 31, 1920 at Big Creek in Logan County.

Martin Van Buren Prince, the third person listed in the 1890 census, was born around 1835. Around 1856, he married Sarah Jane Carter, a daughter of Barney and Mahulda (Mullins) Carter, residents of the Hoover Fork of Harts Creek. Carter was a well-known Confederate officer in the war. During the war, Prince served as a private in Company F of the 5th Virginia Infantry. His dates of service were from August 10, 1861 until June 26, 1863. In 1884, Prince was listed in a business directory as “Van B. Prince, physician,” at Warren, a post office on Harts Creek in Lincoln County.

William Kelley, the fourth veteran in the 1890 census, was born around 1820 to Bryon Kelley in Wise or Tazewell County, Virginia. Around 1841, he married Hannah Osborne, with whom he had at least eight children. In 1850, he was a resident of Tazewell County. During the war, from November 4, 1862 until August 15, 1865, Kelley served in Company C of the 19th Kentucky Infantry. According to family tradition, Kelley was pressed into service by Yankees. “A bunch of Yankee recruiters came to Grandpa’s home and forced him to join up,” said the late Marshall Kelley of Harts. “He said he had to take his son with him because the rebels might come and kill him. Harvey was only about fifteen so they didn’t want him to go. But he went with Grandpa and was with him the whole time. He didn’t do any fighting. He just worked in the camp.” In 1870, Kelley was a resident of Pike County, Kentucky. Throughout the 1870s and early 1880s, Kelley fathered five or more children by different women before marrying Nancy Branham. They were the parents of at least five children. In the late 1880s, around 1888, Kelley sold his farm near Wise, Virginia and moved to the present-day site of the Main Harts Creek Fire Department. In 1890 or 1891, he sold out there to Tom Farley, his son-in-law, and moved back to Kentucky. Kelley died in February of 1902 in Cumberland, Kentucky or Clintwood, Virginia.

Robert Lee Vanderpool, the fifth Union man listed in the 1890 census, was born around 1849 to Jim and Sally (Beverly) Vanderpool. During the war, from May 1, 1864 until March 11, 1865, Vanderpool was a sergeant in Company G of the 1st Kentucky Infantry. Around 1871, Vanderpool married Becky Aurelia Murray, a daughter of Hiram and Francis (Thornsberry) Murray. He and Becky made their home in the Chapmanville District, where they reared at least seven children.

John Rose, the sixth person in the 1890 census, enlisted in Company G of the 1st Kentucky Infantry on the same day as Vanderpool. He was a private and was killed in battle during the war. In the 1880 census, Rose’s widow, Parline, was listed in the Chapmanville District of Logan County with four children. In 1890, Parline was still a widow and living at Warren. By 1900, no Roses lived in Logan County.

The last Union veteran listed in Mitchell’s 1890 enumeration was Allen K.M. Browning. During the war, Allen was a private in Company C of the 9th Virginia Infantry. He enlisted on January 15, 1862. He claimed some type of rupture as a war-related injury. In 1870, no one by Browning’s name lived in Logan County; in 1880, however, two local men appear by the name of “A.M. Browning.” One, aged 56, lived in the Logan District and was married with four children. The other, aged 45, lived in the Magnolia District and was married with six children. By 1900, there were no A.M. Brownings in Logan County census records.