__on Adkins and Miss Cora __ were shopping in Logan Saturday.

___ of Logan was the guest ___ Jessie Brumfield Sunday.

__ why all the boys have forgotten ___ Curry Branch.

__ Brumfield has returned __ a visit with relatives in __.

Jessie and Anna Brumfield __ Adkins were seen out horse back riding Friday.

Fisher B. Adkins has been __ for the last two weeks.

__ and Mrs. Herbert Adkins is busy preparing for the Christmas holidays.

The school at Harts is progressing nicely with J. Johnson teacher.

Enos Dials seems to be very __ old coals have been kindled on __ Creek.

__ Rotie Farley and Carmus Adkins of Mud Fork have been visiting here recently.

Combinations: Inez going to the ___; Anna and Robert out walking; __ and her powder puff; Bessie and her bobbed hair; Cora and her curls; Herb and his bath robe; Watson and his pipe; Fred and his coal bucket; Billy and his horse; Johnny and his frock tail coat; Pearl writing letters; Tom going down the road.

NOTE: Part of this page of the newspaper is torn and some words are missing. 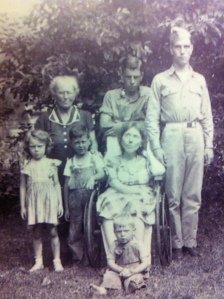 “My dear, dear dream boy came one evening,” Pearl wrote in May or June. “He stayed all night. After supper I was sitting on the porch. Cora was out there. My heart dearest came and sit down at my feet. He talked to Cora of first one thing then another. He changed the subject all at once and asked Cora if the doctors thought there was any chance for me ever to walk. I don’t remember the talk for I felt slighted and hurt. To think he would sit at my feet and then ask some one else about my walking powers, if there was any chance of me ever.

“Well, I spent another sleepless night for he slept in the next room. I can now see him as I write next morning at the breakfast table. I looked across the table straight into those clear but sad eyes — those eyes which sent the blood over my neck and face to burn my fevered brain. He is gone and left a heavier heart and a sadder face behind him than was there when he came. I don’t guess he ever thought of the joy he brings to a sad and lonely woman when he comes or even dreamed of such a thing that I loved him. Well, I don’t care if he ever knows. I love him just the same.”

“Well, it seems that after all I might have a chance to get well,” Pearl happily wrote the following May. “Cora went to Huntington to Dr. Guthrie and told him my history. He said it was a strange case — that he couldn’t tell whether there could be any thing done with me without he could see me. He told her a certain time a board of doctors met at his hospital and, if they would bring me down there when they met, it would be a good chance to have my case studied. And among so many doctors some ought to learn what was the matter with my back. They took me under examination for three days. They took Xray pictures but all of it didn’t bring to light the cause of my troubles. Doctor Guthrie told Papa he could on the third day evening take me home and he was going to study a while longer on my case. The doctor told me to come home and whistle, sing and be a happy girl that he might have good news for me in a few days.

“I came home but I wasn’t happy, but prayed to the Heavenly Father has I never prayed before. I prayed to him to give the doctor’s knowledge to learn the cause of my troubles so they could doctor me and by the help of God I would get so I could walk. I prayed with all the knowledge the Lord give me to pray with, but my prayers were in vain. At last, my verdict was read. It read me a cripple for life. Oh that terrible news. I remember the morning I received the news. It was such a bright sunny morning and to receive such news on such a bright day I would just about as soon it would have been my death sentence for it wouldn’t have been much worse to think of leading a life so hapless as mine. Oh God, I don’t know how I ever went through that day with such sorrow as mine, for all hopes of happiness were blotted out forever. Dr. Guthrie went so far as to advise Papa not to spend any more money for he didn’t think there was any use to while I was as well off as I was, for some doctors would experiment on me. Where they might do me good they could do me a lot of harm. While it was bad, it wouldn’t be any thing to compare with a wracking body of pain. While I don’t hurt, let me be, he said. That all seems like a dream now. I only wish to my Lord above it had been a dream.”

“Alone on Xmas Eve with my thoughts centered on my one love,” Pearl wrote. “I was thinking of writing to a friend. Some folks came in. He was with them. They were all enjoying their selfs, all but me and I couldn’t help but be sad. He was looking rather sad, too. He walked around and after a while he said some thing about his girl. They laughed about her and he said, ‘She’s one of these girls that can talk.’ And, ‘I don’t like a girl that sits in the corner and smokes and talks to the cats.’ Well that caused a loud laugh but no one ever knew the wound those thoughtless words caused on my tender heart. No one shall ever know till I’m through with this life. There was no more pleasure for me that evening. He went away not knowing the hurt feelings he left behind or cared as little as he knew I supposed.”

“He come early in the morning and stayed till late in the afternoon — but he stayed in the next room,” Pearl wrote later. “Oh God, what I have to suffer just to think he was in the room and I didn’t have the strength to walk to where I could see him. What misery is some people don’t know, but if they were in my place they would soon learn. For instance, if some of you was in love and in my standing and in love and not a single hope of him ever being in love with you. If it wasn’t who it is I would have some hope, but as it is I’m in despair. What would you do, dear friend, if you were like me? Do nothing as I am doing? I know with out asking but the Lord above may change him and make him love me by and by.”

“We hadn’t any guests all day,” Pearl wrote on a Sunday in February. “Cora and I was setting by the fire. When he came in it was like the ray of sunshine drifting through a window pane on a bleak day for my life was as bleak as the day. Cora was rather friendly to him, some thing she hardly ever is. She asked him where he had been. He told her he was just walking around and thought he would stop in to see them all. He kept eating some thing. She asked what it was. He told her and said, ‘Don’t you want some?’ but never offered me any. I don’t guess he thought of me for I was as cold as an ice burg in those days. But I’m not one bit colder than he is but I’m not much better yet. Dear reader, don’t judge me too harshly for I have enough to bear and enough to make me cold and bitter for I didn’t have any girlfriends to talk to. Cora didn’t seem to care whether I was happy or not then. Aunt Marg had died then and Ma had to work so I didn’t have any one to talk to. All I had to do was to nurse my misery and think I was the most unfortunate girl in the world. You know, while Aunt Marg lived she could tell me of many things which helped to while away the hours. And I never was so bitter till after she was gone. I don’t blame my mother for my growing so hard and cold at life, for her life is a hard life to live any way. Aunt Flor was the only one that ever talked to me. She told me all the news and I liked for her to come. She seemed to understand me, but she didn’t stay much with us in them days. You see, I had a lot of time to keep growing bitter and crosser for I thought they didn’t care any thing about me, whether I lived or died. The Lord only knows what I could have been like by now if a certain thing hadn’t happened. Well, that changed me a little for a while but I soon grew cold again, but not so bad as at first. Kind friend, believe me. I spent a many a sad and lonely day then without one glimpse of happiness only when he came, not to say anything about the ones I spend now.”