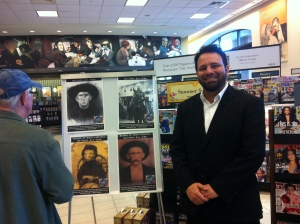 Thanks to Barnes and Noble in Morgantown, WV, for hosting us last weekend. We met some amazing people and enjoyed our visit. 29 August 2015

From “Virginia and Virginians, 1606-1888,” published by H.H. Hardesty, we find this entry for Adolphus Spratt, who resided at Gilbert in Logan (now Mingo) County, West Virginia:

Pat and Eva (Brumfield) Kirk, my great-grandparents, with daughters, Lois and Iris. For most of their lives, they lived on Piney Fork of West Fork of Harts Creek in Logan County, WV, Pigeon Creek in Mingo County, and Ferrellsburg in Lincoln County. Poppy and Grandma married on 30 August 1911 (my birthday) at Cole Branch of Harts Creek.

The Squire Sol Adams Family Cemetery, which I visited on 5 July 2014, is located a short distance up the hollow behind the Sol Adams cabin at Whirlwind on Harts Creek, Logan County. It is located on the hill behind the cabin to the left of the road and creek going up the hollow. You can drive to the cemetery.

Rosalie Alexander (12 July 1938 — only date); d/o Charles and Olive (Adams) Alexander; died July 14, 1939, according to death record; her name is at the top of the stone also containing Everett Alexander’s name

Unmarked grave with headstone and footstone

Elmer Adams (03 June 1917-03 June 1917); Logan County death records list an “Elina Adams” dying at Whirlwind in this year with no parents given

Unmarked grave with headstone and footstone

NOTE: This tombstone is located behind the Rosalie/Everett E. Alexander stone that begins Row 2. I think Everett is buried in Row 2, and Rosa is buried directly behind him. The family has only bought one modern tombstone to mark both graves.

There is a black rock unusually close to the grave marker for Ellen Adams; I think it is her old stone. It is unlikely another grave, but could be.

Unmarked round headstone and footstone

Mollie Mullins (30 October 1904-05 March 1933) This is Molly’s old stone (see above); this tombstone is shaped the same as Molly’s footstone (above); someone has used this stone to mark a grave beside of Molly

At a spot beside of Thomas J. Yeager’s grave, his tin funeral home marker is placed at the foot of where an adjacent grave might be. It is not placed at his footstone; it is placed beside of his grave location. There is otherwise no indication that a grave is located beside of him.

From “Virginia and Virginians, 1606-1888,” published by H.H. Hardesty, we find this entry for Joseph Short, who resided at Baileysville in Wyoming County, West Virginia:

Today, the book and I will appear at Barnes and Noble in Morgantown, WV, from 1 pm to 4 pm. If you’re local, come and see us!

An unknown local correspondent from Big Creek in Logan County, West Virginia, offered the following items, which the Logan Banner printed on June 6, 1924:

We sure are having some weather down here at present time.

Mr. and Mrs. Philip Hager of Hamlin have been visiting relatives of Big Creek.

Gracie tell us why you let Rubie take Earl.

Miss Ethel Elkins and Mr. Earthel Hill are engaged to be married June 25.

Mr. George Shackleford of Henlawson was visiting Big Creek Sunday. Tell us George why you were looking across the river so lonesome like.

Mr. Jessie Toney must have the blues about something. He plays the Victrola from 8 o’clock in the morning until 10 in the afternoon. His favorite piece is “Red Hot Mama.”

Mrs. Nan Vance has been ill for several days but is improving now.

Mr. Franklin Estep had a long chat with Miss Ethel Elkins this morning.

Gladys, you better step up or she will beat your time.

An unknown local correspondent from Leet in Lincoln County, West Virginia, offered the following items, which the Logan Banner printed on July 18, 1924:

We are real glad to see our bit of news in the dear old Banner.

Most every body attended church on Laurel Fork Sunday. Everyone reported a nice time.

Mr. James Brumfield and his son, Wetzel, were the dinner guests of friends Sunday.

Willie Payne and Anderson were seen going up the Big Ugly road, Sunday. Wonder where they were aiming?

Walter Dial will soon leave for up the river. Gee but won’t Nora be lonesome!

Bunch Lambert and Miss Kate Reynolds were seen out horse back riding Sunday.

Miss Gladys Payne will remain at Silas, W.Va., for a few days.

Good by and best wishes to the dear old Banner and its readers. 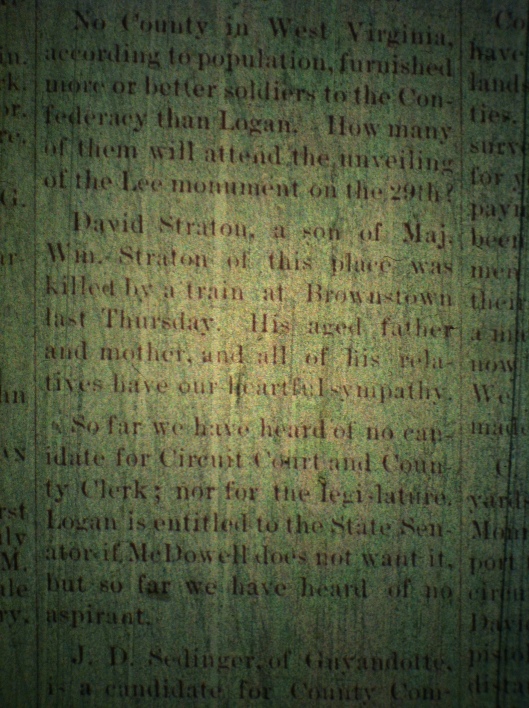 From “Virginia and Virginians, 1606-1888,” published by H.H. Hardesty, we find this entry for Wyatt B. Shannon, who resided at Oceana in Wyoming County, West Virginia:

William H. and Gertrude (Sias) Frye of Frye Ridge, Lincoln County, WV. These are my great-grandparents. Harold Frye, born in 1941, is also shown in the photo.

The Andrew Lewis “Lew” Sias Family Cemetery, which I visited on 23 August 2015, is located in the headwaters of East Fork of Fourteen Mile Creek in Lincoln County, West Virginia.

Mom and I recently placed a military marker at the grave of Andrew Lewis Sias, who served in Company D, 34th Battalion Virginia Cavalry. Lew Sias is my great-great-great-grandfather. He is buried in the head of East Fork of Fourteen Mile Creek, Lincoln County, WV.

An unknown local correspondent from Leet in Lincoln County, West Virginia, offered the following items, which the Logan Banner printed on June 27, 1924:

We are at this writing having some beautiful weather.

We are glad to see Mr. and Mrs. Charley Lucas moving back in town again.

Mr. and Mrs. Lonnie Lambert will make their future home at Wilbur, W.Va.

Mr. Walton and Ossie Dial were visitors in Leet, Sunday.

Misses Lena and Edith Frye were out horse back riding Sunday.

Miss Lizzie Payne made a flying trip to Huntington, W.Va.

Mr. and Mrs. Bruce Hatfield are leaving for Wilburn, W.Va.

From “Virginia and Virginians, 1606-1888,” published by H.H. Hardesty, we find this entry for John C.H. Shannon, who resided at Sun Hill in Wyoming County, West Virginia: 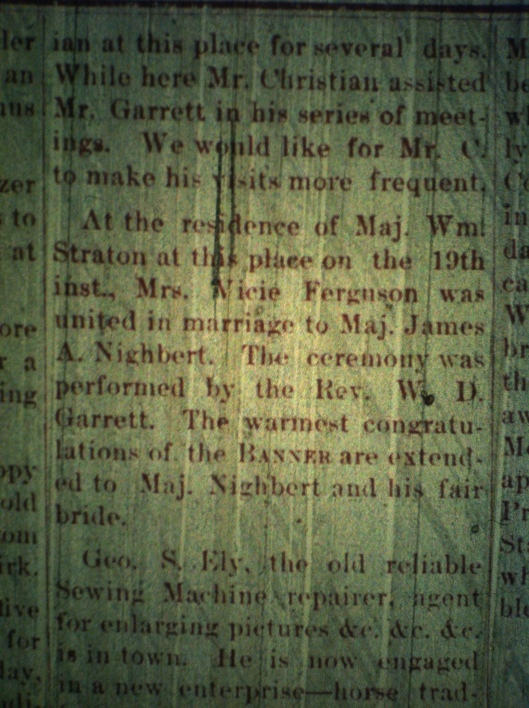 The W.H. Bias Family Cemetery, which I visited in 2007, is located on Mill Creek in Logan County, West Virginia.