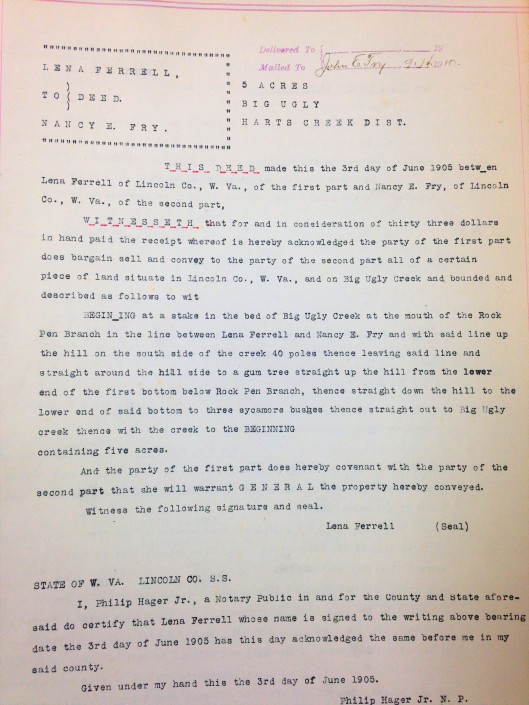 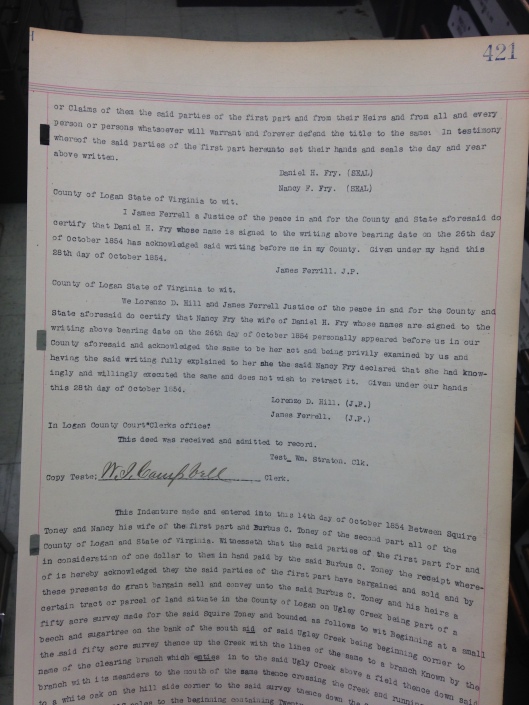 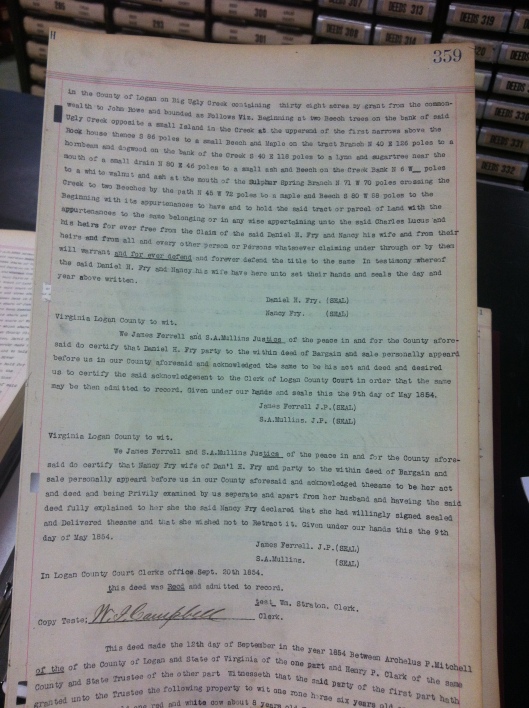 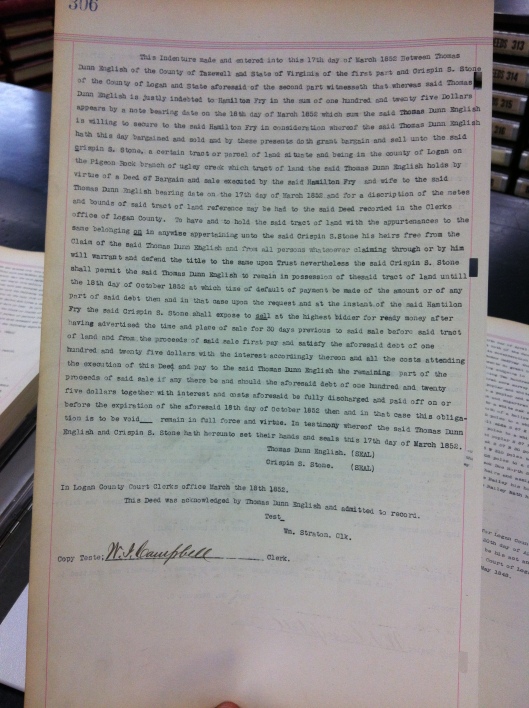 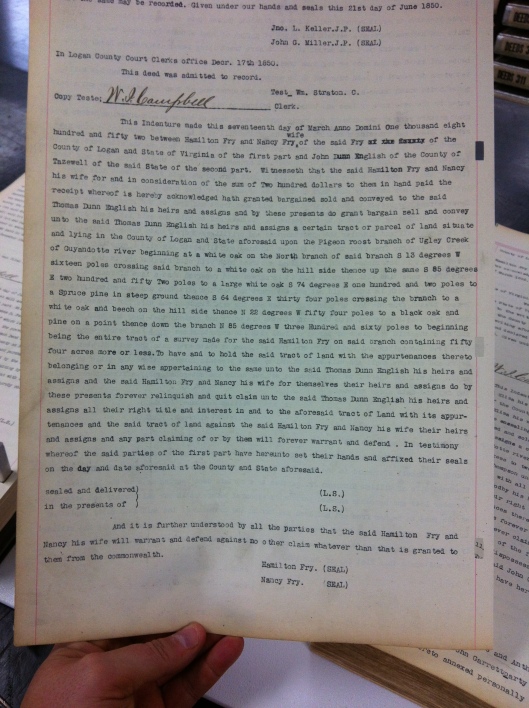 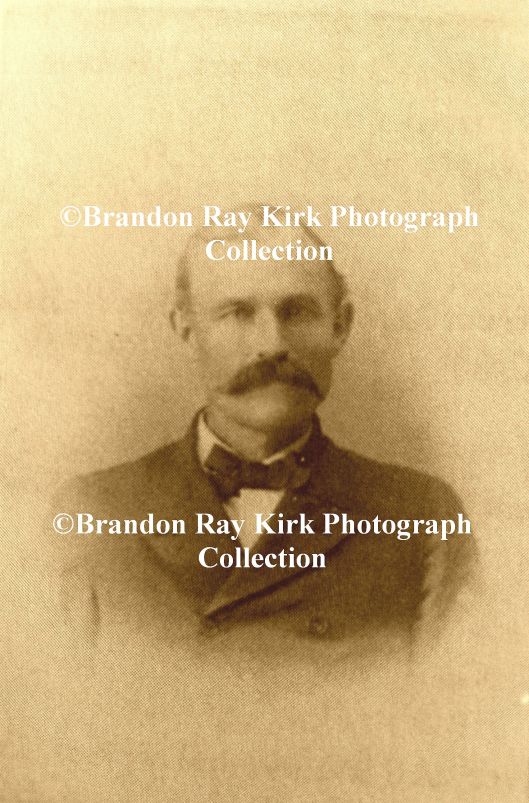 Burbus Clinton Spurlock (1851-1940), son of Robinson and Nancy (Cummings) Spurlock of Jefferson District, Lincoln County, WV. About 1876, he married Nancy Ann Fry, daughter of Hamilton and Nancy (Hunter) Fry, of Big Ugly Creek. He lived at Midkiff in Lincoln County, where he appears in 1900 and 1910 census records. He was a well-known capitalist in the Guyandotte Valley, retiring to Huntington.

Around the turn of the century, in the years just prior to the arrival of the C&O Railroad in the Guyandotte Valley, George W. Ferrell, a musician in present-day Ferrellsburg, busily wrote songs about local personalities and events. Today, Ferrell’s solitary grave is marked with an ornate tombstone that sits at the edge of what was, until recent years, a garden.

George W. Ferrell was born on October 10, 1874 to Archibald B. and Martha E. (Fry) Harrison. Archibald was the son of Guy P. and Cleme (Harmon) Harrison of Tazewell County, Virginia. Mary was the daughter of Daniel H. and Nancy P. (Bailey) Fry of Logan County. Ferrell’s birthplace is not known because, soon after his parents married in 1865, they left the area, settling at first in Kentucky and then elsewhere.

In 1878, George, then four years old, returned to Lincoln County with his parents. In 1880, his family lived near the mouth of Big Ugly Creek or at the “Bend,” just across the Guyandotte River. Shortly thereafter, they made their home at Phernatt’s Creek, further downriver in Laurel Hill District.

By 1889, Ferrell’s father — who was perhaps recently divorced from his mother — had sold all of the family property in Harts Creek District and at Phernatt’s Creek and relocated to Nine Mile Creek.

Details concerning Ferrell’s early life remain elusive. It is not known who influenced him musically or when he even started writing or playing music. There is no indication of his father or mother being musicians but his mother’s first husband, Jupiter Fry, was a well-known fiddler on Big Ugly. Some of his first songs may have been inspired by his father’s stories of the Civil War.

At some point in his young life, and for reasons unknown, Ferrell was adopted by Keenan and Arena Ferrell, a childless couple at Ferrellsburg in Lincoln County.

“I heard he was just a big old boy when the Ferrells took him in,” said Don McCann, current owner of the property surrounding Ferrell’s grave. “They didn’t have any children of their own.”

In the 1900 Lincoln County Census, Ferrell was listed as their 25-year-old adopted son. More than likely, he was assisting the Ferrells in the operation of their store and business interests.

It is easy to see how Ferrell would have become acquainted with his future foster parents.

“His father worked a lot of timber around Big Ugly or Green Shoal,” said Harold R. Smith, Lincoln County genealogist and historian. “And that would have put him in close contact with the Ferrells at Ferrellsburg.”

But why was he not living with his mother (wherever she was), who died in 1901, or his maternal grandmother, who was alive on Big Ugly? And what was his connection to the Ferrells?