My name is Deanna Hatfield and tonight I would like to share with you a West Virginian, Allen Hatfield, who the community of Beech Creek honored and loved. Allen was born October 11, 1877. He was the youngest child of the pioneer couple, Wall Valentine Hatfield and Jane Maynard Hatfield, who settled on Beech Creek in 1861, the year that the Civil War broke out in this country. His parents had settled at the mouth of Grapevine Fork of Beech Creek. They had occupied a log cabin near the present site of Lawrence Hatfield’s home. He was the nephew of Captain Devil Anse Hatfield, clan leader in the famed Hatfield-McCoy Feud, and a first cousin of Willis Hatfield, the only surviving child of that family.

Almost until the day of his death, Allen carried a sadness in his heart over the death of his father in the days of the famous feud. His father, a peaceable man, was not an active member of the fighting group of the Hatfields during the trouble between his family and the McCoys but was named in warrants along with two of his sons-in-law, Doc and Plyant Mayhorn. Allen Hatfield, but ten years old at the time, remembered that his father Wall, thinking that he had nothing to fear in the courts of Kentucky, wrote the prosecuting attorney of Pike County that he and his sons-in-laws wished to surrender in Pikeville and stand trial for crimes for which they were accused. Allen Hatfield recalled the incident from his boyhood, including the feud. His father did go to Pikeville to voluntarily stand trial and clear his name but he was convicted by a prejudiced jury, the son remembered, and was sentenced to life imprisonment at the Kentucky State Prison in Frankfort. After sentencing, he lived about one year and his burial place is still unknown today. The two Mayhorns served several years and were later pardoned.

One of his fondest memories was that of his mother Jane who took over the management of the home and did a good job of raising a large family after her husband was taken from her. She did chores around the homestead. A great and interesting conversationalist in his adult years, he liked to tell of how he and his friends made bows and arrows–arrows consisting of straight pieces of wood with a horseshoe nails attached as the spike. He became an excellent marksman with the bow and arrow and later with his first rifle as he helped to provide squirrels and other wild game for the family table.

The early years of Hatfield’s life were marked by sadness as a result of the loss of his family in the feud. But his hours spent in the great outdoors hunting and fishing provided a therapy that led to his development to splendid manhood. He was several years old when the Norfolk and Western Railroad Company built an extension from Virginia to southern West Virginia and Mingo County, which still was Logan County at that time.

In 1899, Hatfield was married to Martha Bell Murphy, daughter of Joseph and Eliza (Steele) Murphy. She had just turned fourteen when he proposed and her family thought she was too young to wed. The young couple sort of eloped the night of April 8, 1899, to Allen’s home where they were married by Allen’s brother, Ellison, a country preacher and a granny doctor, as he later recalled. Late that summer, he amassed enough lumber to build their first home—a one-room abode that was erected next to the hillside just north of the present homestead. Allen Hatfield made most of his furniture and his wife tended a garden and dug ginseng to help the family fortune.

During the ensuing years, the Hatfields had eleven children, two of whom preceded them in death. Lawrence Hatfield, who married Dollie Kiser, is now retired and lives with Dollie on Beech Creek at the mouth of Grapevine Fork. Estel Hatfield, who married Virginia Varney, lived with his dad and still lives in the old homeplace. Estel is an agent for the Norfolk and Western Railroad Company. Major Hatfield, who married Mildred Friend, is employed as an agent also for the Norfolk and Western Railroad Company in North Tazewell, Virginia. Rosa Hatfield, married Wayne Simpkins, lives on Beech Creek on Right Hand Fork. Goldie Hatfield married Gordon Smith, and they make their home below Grapevine Fork on Beech Creek. Mamie Hatfield married Charlie Simpkins and makes her home in Rockville, Maryland. Glendeen Hatfield married Douglas Berlin, and they make their home in Louisiana. Etta June Hatfield, never married and lives in Cincinnati, Ohio. Erma Hatfield married Forest Baisden, and she lives in Williamson, West Virginia. Milda Hatfield, deceased, was a retired school teacher and was never married. Joseph Chester Hatfield, died at six months old.

In 1914, Allen bought from his brother Smith a grocery store at the old homeplace and moved the merchandise to a small building at his home. He built a large home later and it was there that most of the children were born. He expanded his business to a larger store building, which still stands, and then he erected the present homeplace. During his early merchandising days, Hatfield was compelled to haul his goods from the railway station at Devon by team and wagon for the roads had not been built and most of the rough team tracks was through the creeks. It was a problem in the wintertime to get through the streams as they were filled with ice. After the county built a road up Beech Creek, he retired his team and wagon and switched to a gasoline-powered vehicle to haul and deliver his goods. He learned carpentry in the early years of his marriage and continued this art until 1964 when he retired. Hatfield was a 57-year member of the Hugh C. Boyd Lodge No. 119 AF & AM at Matewan and received his 50-year service award from the Grand Lodge of West Virginia in 1970. The lodge, when he became a master mason, was known as Thacker No. 119. It was located at Thacker, West Virginia. It later was moved to Matewan. He also belonged to the Beni Kedem Temple of Charleston, being a 50-year member of the Shriners. He also received the honorary commission of a Kentucky Colonel on April 10, 1972. He had been a member of the Devon Church of Christ since 1916 and sponsored the building of the present church that stands near his home on Beech Creek.

In his years of selling groceries, Hatfield said he never lost but 50 dollars in bad debts. He was proud of his heritage, a leader in his community, and in his active life a crack shot with a rifle, pistol, and shotgun. His hunting and fishing kept the table supplied with food. He won beef, hogs, turkeys, and chickens in the old-time rifle matches that were so popular in the Beech Creek area years ago. He and the former Martha B. Murphy were married 71 years before her death on May 25, 1970. His life might have been used as the subject by the poet who wrote, “Let me live by the side of the road and be a friend to man.” Allen Hatfield had spent a lifetime doing just that, living beside a little country road on Beech Creek and being a friend to mankind. On March 2, 1975, Allen was taken to the Williamson Memorial Hospital for ailments associated with his advanced age. He then was released and re-entered the hospital on April 18 in critical condition. On Friday, May 2, 1975, the community of Beech Creek lost one of the dearest old-timers that was ever known. Allen Hatfield, 97, prominently-known Mingo pioneer citizen, retired merchant of Beech Creek, died at 3 a.m. in the Williamson Memorial Hospital of a lingering illness. Funeral services were scheduled at the Chambers Funeral Home Chapel with his beloved ministers Clyde Kiser and Raymond Hatfield officiating. Burial took place in the family cemetery behind the homeplace on Beech Creek. His grandsons and great-grandsons were his pallbearers. Allen would have wanted it this way. Simple.

NOTE: Some of the names may be transcribed incorrectly. 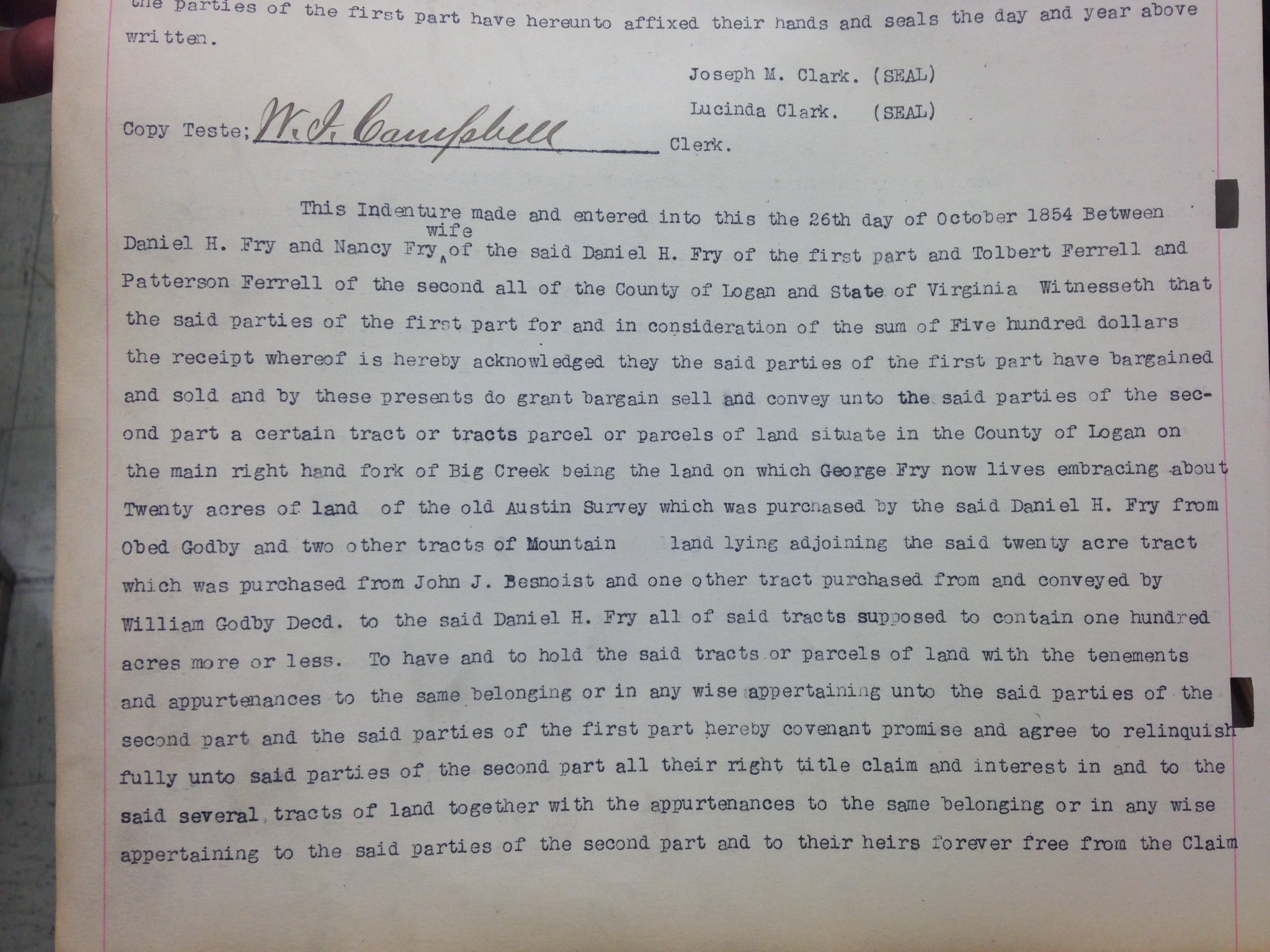 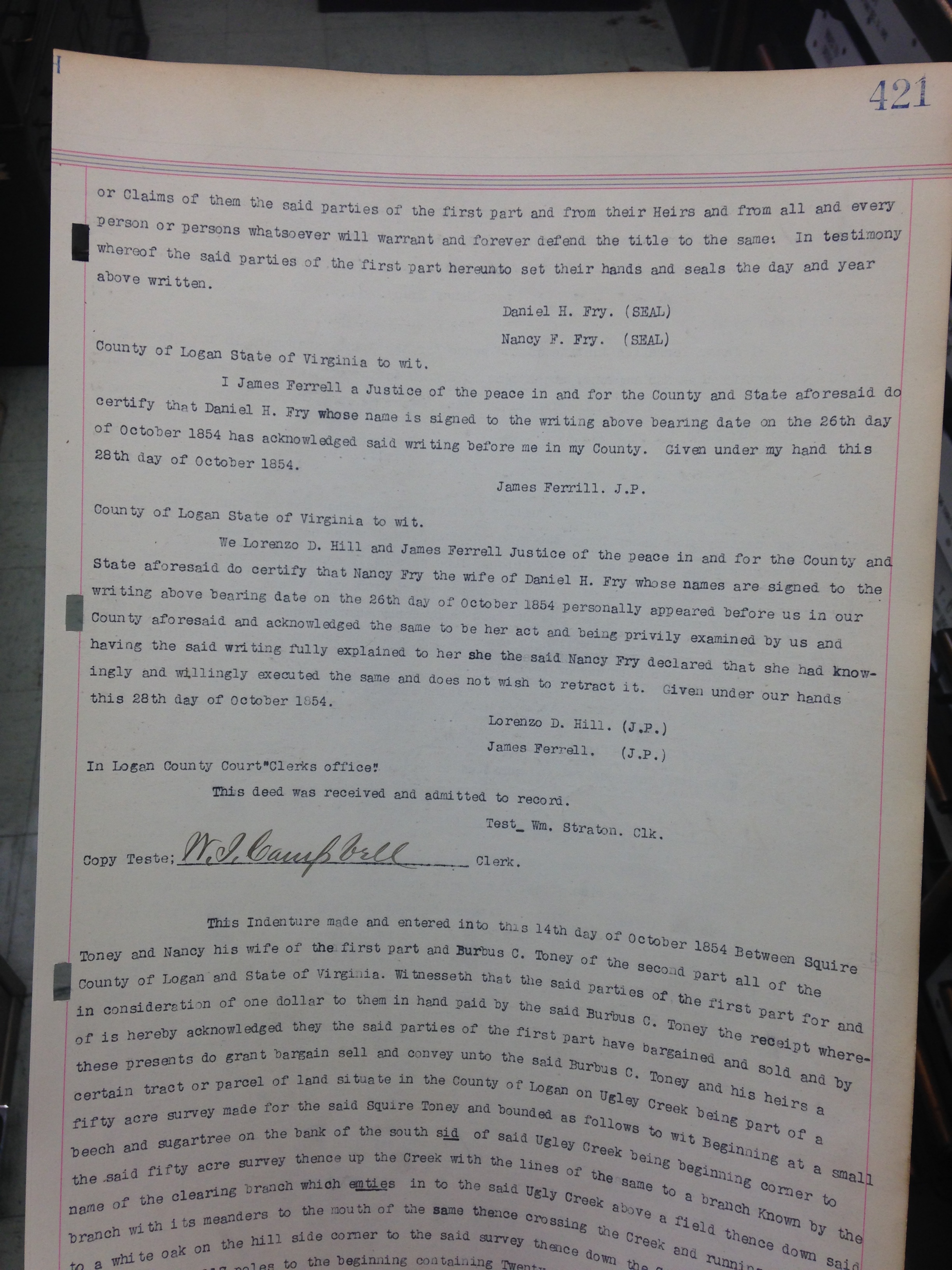