In the 1890s, land speculators James L. Caldwell, a banker from Huntington, C.W. Campbell, an attorney from Huntington, and John Q. Dickinson, a banker from Charleston, acquired many acres of land on Dingess Run and Rum Creek. The trio procured some of Logan County’s finest coal lands with six accessible seams of coal. They formed the Dingess-Rum Coal Company in June of 1903 to administer their lands, which totaled over 26,000 acres. They surveyed a railroad bed up Dingess Run and laid the cross-ties, leaving only the rails to be laid by the C&O Railroad, which occurred by late 1906. From there, the railroad extended up Right Fork and Left Fork (Ethel Hollow). At the juncture of the two forks, the company town of Ethel, named for the daughter or wife of an early coal operator, was established around 1907. In 1923, the town was populated by 2000 residents. 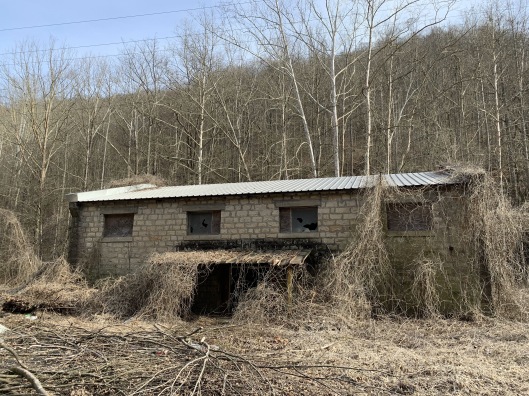 Ethel Coal Company Supply Building, constructed about 1914 by Italian stonemasons. The building served as a staging area for Don Chafin’s defensive forces in the Battle of Blair Mountain. 1 March 2020