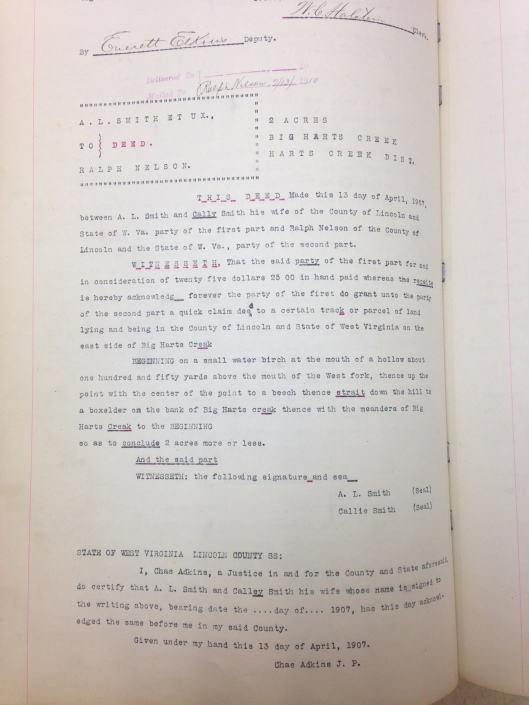 The following deed index is based on Deed Book 59 at the Lincoln County Clerk’s Office in Hamlin, WV, and relates to residents of the Harts Creek community. Most notations reflect Harts Creek citizens engaged in local land transactions; some reflect Harts Creek citizens engaged in land transactions outside of the community. These notes are meant to serve as a reference to Deed Book 59. Researchers who desire the most accurate version of this material are urged to consult the actual record book.

NOTE: I copied all of these deeds.

Over one hundred years ago, John Fleming, a desperado twice sentenced to serve time in the West Virginia State Penitentiary, escaped from the Lincoln County jail and disappeared forever in the mountains of the Big Sandy Valley.

John P. Fleming was born in February 1868 to Preston and Arty (Mullins) Fleming at Upper Elkhorn Creek in Pike County, Kentucky. Nothing is known of his early life except that he had a daughter named Roxie by Lucy Mullins in 1887. In the late 1880s, John and his family migrated to West Virginia and settled in the Abbott Branch area of Logan County, just above Harts Creek. In 1891, his brother William married Luraney Frye, a daughter of Christian and Elizabeth (Hunter) Frye, in Logan County. In 1897, his sister Sarah married Squire Dial in Logan County. The next year, brother Robert, or Bob, married Lillie Dempsey, also in Logan County.

On December 25, 1892, Fleming murdered his uncle, John H. Mullins, at Big Creek, Logan County. Essentially, the story went like this: Mr. Mullins’ sons, Henry and Emory, were in a quarrel and Fleming intervened. The elder Mullins came to settle the matter and Fleming fled across a creek. Mullins pursued, knife in hand. At the creek, Fleming shot his uncle. He was immediately taken before Squire Garrett, who discharged him. When a new warrant was sworn out for him, he fled the county. In March of 1893, his wife attempted to meet him but became ill and died at Dunlow, Wayne County. Fleming was at her bedside when authorities arrested him. A Logan County jury found him guilty of second degree murder and Judge Thomas H. Harvey sentenced him to eighteen years in the West Virginia state penitentiary in Moundsville. In the 1900 census, he is listed there under the name of “J.P. Flemons,” inmate. Curiously, he claimed to have been married for one year.

After his release from prison, John married Sarah Elizabeth “Lizzie” Frye, a daughter of John Henan and Ida Cosby (Headley) Frye. The Fryes lived on Sulphur Springs Fork of Fourteen Mile Creek, several miles below Harts Creek. Lizzie, born around 1887, was roughly eighteen years younger than John. They may have become acquainted through John’s brother, William, who had married Lizzie’s aunt, Luraney Frye, in 1891.

“Aunt Lizzie was married to John Fleming,” said Willard Frye, an elderly resident of Frye Ridge, in a 2003 interview. “John was a mean man who packed two .45 pistols. He was a member of Charley Brumfield’s gang. He was mean to Aunt Lizzie.”

Fleming’s involvement in the Brumfield gang soon led to more prison time. In the summer of 1907, the “feudist,” as newspapers would later call him, became entangled in the peculiar “Adkins conspiracy case.”

A little earlier, in December of 1906, Margaret Adkins, Fisher B. Adkins, Floyd Enos Adkins, Albert G. Adkins and Fed Adkins — all associates in an Adkins general store business in Harts — took out a four-month loan for $600 from the Huntington National Bank. By April 1907, they had not paid any money toward the loan and asked for a four-month extension. In late June or July, Margaret Adkins, sister to Fed, filed a bankruptcy petition. On July 3, the District Court of the United States for the Southern District of West Virginia adjudged her bankrupt. J.P. Douglass (later a Speaker of the West Virginia House of Delegates) was appointed as receiver in the case and arrived in Hart to survey the business. A.L. Smith stood guard at the store.

On July 5, after the government had taken control of the merchandise in the store, a vigilante group called the Night Riders robbed the store and hid the various goods in neighbors’ homes and barns.

Following the robbery, detectives descended on Harts in an effort to unravel the details of the crime. The most famous of these detectives was Dan Cunningham, a one-time participant in the Hatfield-McCoy Feud. More recently, Mr. Cunningham had been employed by Governor William M.O. Dawson in Raleigh and Wyoming Counties. During his Harts Creek investigation, he boarded with locals and eavesdropped on conversations between suspects. Those involved in the store heist, meanwhile, used various means to suppress information. But as the pressure of the investigation bore down on locals, neighbors began to snitch on each other.

By December of 1907, the State had evidence against eleven men in what the Charleston Gazette called “the celebrated Adkins Bankruptcy Case” which “if proven by witnesses for the government, will equal any novel ever written by Victor Hugo.” Those accused — described by the Huntington Herald-Dispatch as “eleven brawny mountaineers” — were Fed Adkins, Charles Brumfield, Albert “Jake” Davis, Manville Adkins, John Fleming, Willard Fleming, Robert “Bob” Fleming, John Adkins, Albert G. Adkins, Floyd Enos Adkins and William “Bill” Brumfield. The state charged the gang with “conspiracy to defraud the government and to impede the administration of justice after the government had taken possession of Adkins store.”

U.S. District Attorney Elliott Northcott prosecuted the case, while Lace Marcum argued for the defendants. In opening remarks on December 5, according to the Herald-Dispatch, District Attorney Northcott fiercely denounced “the eleven men who have been a terror to the country surrounding the village of Hart, in Lincoln county, for the past six months. He stated in words burning with bitterness that the government expected to prove beyond any reasonable doubt that crimes that would narrow the very souls of every juror had been committed in the vicinity of Hart, and had the story been told him three weeks ago he would have thought it a piece of fiction pure and simple… He also alluded to the fact that the government would prove by witnesses who would tell of the horror that had been created in the neighborhood: houses burned, men shot down from ambush, houses with unprotected women had been shot up and the inmates terrorized until they were afraid to venture outdoors. It was a thrilling recital of the worst crimes that have taken place in this state in a decade.” According to the Herald-Dispatch, the eleven defendants “showed but little interest except to look at each other and smile when the crimes were talked of.”

In Marcum’s opening remarks on December 5, he stated that he would prove the goods found at the homes of the defendants were there several weeks before the Adkins store went bankrupt.

On December 6, Northcott questioned Rosa “Sis” Mullins, a sister to Emory and a resident of Abbotts Branch, who swore that she saw John Fleming’s brothers — Bob and Willard — go by her house the night of the robbery on their way to the Adkins store.

“Nearly every witness who testified yesterday,” the Charleston Gazette reported on December 7, “showed just how desperate these defendants are, and the testimony of Capt. Dan Cunningham unraveled a tale of horror that was realistic in every sense of the word.”

On December 7, Lace Marcum began his defense of John Fleming and the ten other Harts men. Bob Fleming, John’s brother, was the second witness called to the stand. He swore that he knew nothing of the robbery until the day after it happened and that he never saw any of the stolen goods. Willard Fleming, John’s other brother, said he stayed with Charley Brumfield the night of the robbery and saw no one armed. John, referenced in one newspaper account as being a “paroled prisoner,” testified along the same lines, as did all the defendants who were called to the stand. “The entire list of defendants swore to very near the same thing,” reported the Gazette.

For the most part, Marcum’s defense of the eleven Harts men had little chance of success considering the evidence against them. In his closing remarks, he was forced to put them at the court’s mercy by claiming that they had acted the way they did because they didn’t know any better. In the end, ten of the accused were sentenced to twelve- or eighteen-month terms in the West Virginia state penitentiary.