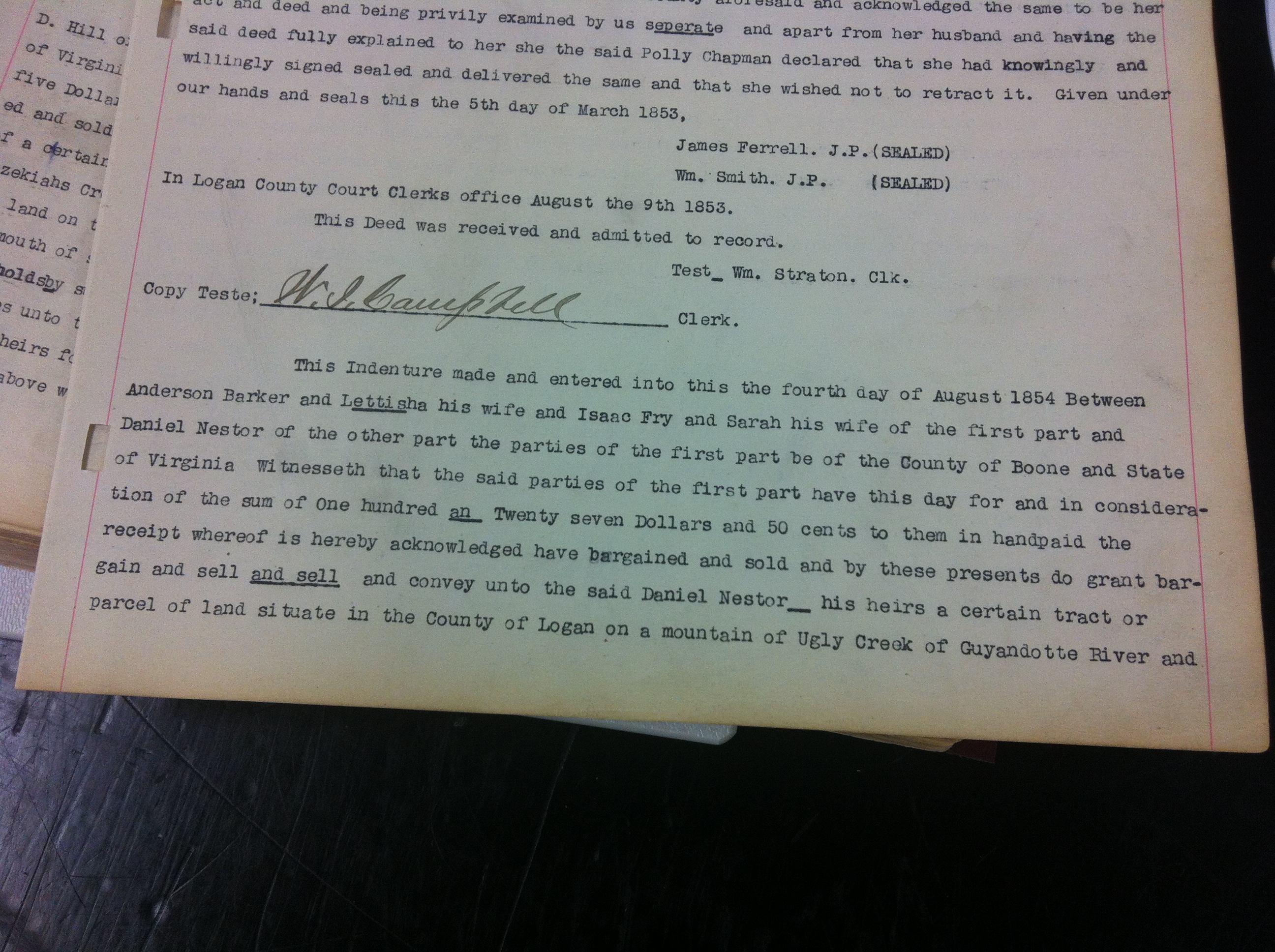 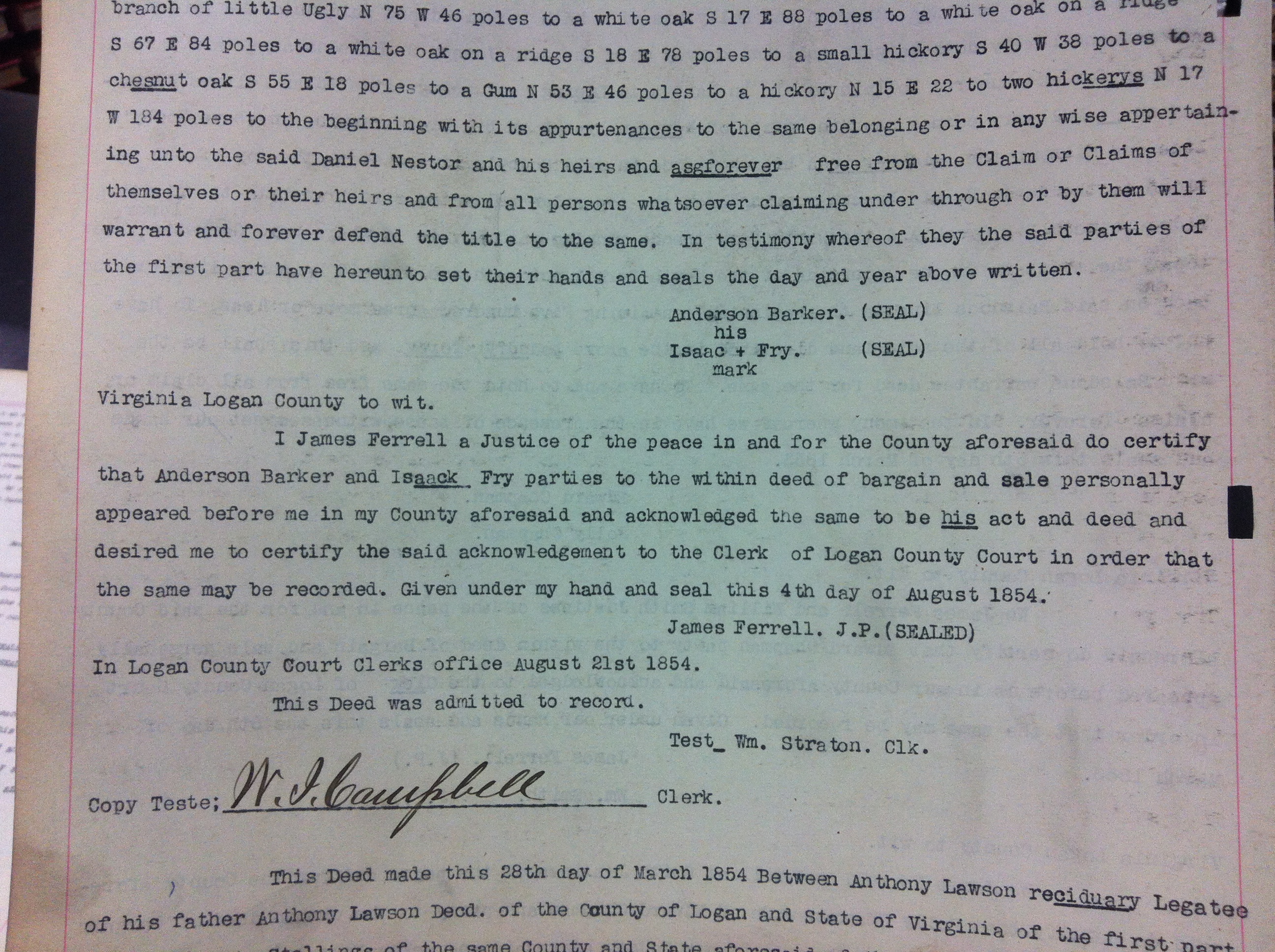 Was born in Logan county, (now) West Virginia, June 18, 1858, and came to Hart Creek district before the organization of Lincoln county. He is a son of Daniel and Valeria (Brumfield) Nester, residents of Logan [sic] county. In Lincoln county, December 25, 1879, the Rev. Isaac Fry united in wedlock William R. Nester and Cora B. Perry. She was born in Logan county, August 7, 1860, and her parents, Isaac Granville and Sarah Ann (Clark) Perry, came to Lincoln count in 1871. Mr. and Mrs. Nester have been the parents of two children: James Lewis, born November 19, 1880, died the same day; Minnis Wirt, November 14, 1881. William Nester was president of the board of education for two years, and is its present secretary, in Hart Creek district, Lincoln county. He owns fifty acres of fine farming land between Big Hart and Little Hart creeks. The land is very productive and abounds in coal and iron ore, and is heavily timbered. Daniel J. Nester, brother of William R., resides with his mother on a farm adjoining William R. Nester’s land. The post office address of William and Daniel J. Nester is Hart, Lincoln county, West Virginia.

John Shanklin Nester grave at Maple Hill Cemetery in Lebam, Pacific County, Washington. Mr. Nester was the son of Daniel and Valeria (Brumfield) Nester. A timber man, he relocated from Lincoln County, WV, to the Pacific Northwest, where he died on February 3, 1927.

John S. Nester and Malinda Dalton were united in the holy bonds of wedlock in Logan county, West Virginia, January 22, 1877, Rev. Isaac Fry officiating clergyman. John S. Nester was born in what is now Lincoln county, December 11, 1853, and his parents were Daniel and Valeria (Brumfield) Nester. His mother is still a resident of the place of his birth. Mrs. Nester was born in what is now Lincoln county, July 3, 1853, and she is a daughter of James and Jane (Workman) Dalton. Mr. and Mrs. Nester are the parents of four children, born: William Henderson, November 23, 1877; Jane, May 2, 1879; Roxy Ann, October 19, 1880; Georgia Belle, March 11, 1882. Daniel Nester, father of John S., served about two years in the late war; he came home on a furlough and was taken down with the fever, during which time the Federal soldiers came, and in order that he might remain at home, Mr. Nester took the oath of allegiance. A woman folded a letter in a paper and sent it to her husband in the Southern army, but through mistake the letter came into the possession of the Federal officers, and Mr. Nester was sent to Camp Chase, and there died. John S. Nester was living here when Lincoln county was formed, and is a farmer on Little Hart creek, owning 150 acres of land, a number of acres under cultivation. The farm is well timbered, and coal, iron ore, building stone and sand beds are abundant. Hart, Lincoln county, West Virginia, is the post office address of John S. Nester.