The killing of Tolbert, Pharmer, and Bud McCoy by a Hatfield-led gang on August 8, 1882 represented one of the most sensational events of the Hatfield-McCoy Feud. What follows is Doc Mayhorn’s deposition regarding the affair: 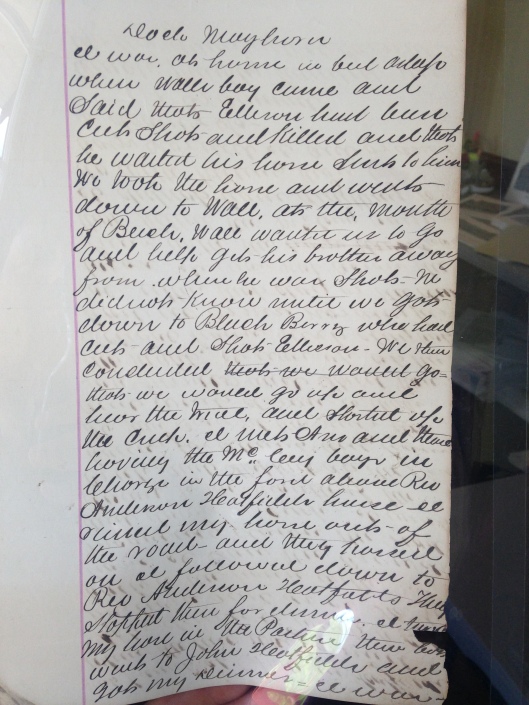 I was at home in bed asleep when Walls boy come and said that Ellison had been cut shot and killed and that he wanted his horse ____ to him. We took the horse and went down to Wall at the mouth of Beech. Wall wanted us to go and help get his brother away from where he was shot. We did not know until we got down to Black Berry who had cut and shot Ellison. We then consented that we would go up and hear the trial, and ___ up the creek. I met Ans and th__ ____ the McCoy boys in charge in the ford above Rev. Anderson Hatfields house. I __ my horse out of the road and they passed on. I followed down to Rev. Anderson Hatfields They stopped there for dinner. I ___ my horse in the pasture ___ ____ walk to John Hatfields and got my dinner I was not present at Anderson Hatfields when the line was formed. After dinner I went to ___ my horse and as I started back to the house with my horse I saw the crowd moving down the road and down the creek. I went down to the mouth of the creek and stopped at the store house for ___ one ____ We then crossed the river and went down to Anderson Ferrills and staid there all night. I was up at the school house next day __ had no arms nor any pistol. either that day or the day before. I was not across the river with the crowd that killed the McCoy boys. I didn’t have anything to do with killing those boys nor did I aid or assist in doing so.

For more information about this incident, follow these links: